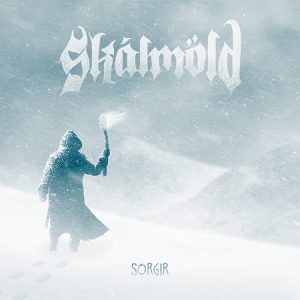 One thing that has always been true about Skálmöld is that their previous albums had a fairly distinctive sound that always hides underneath whatever direction they decide to take their albums in. Whether one discusses their debut album, Baldur, or even efforts such as Vögguvísur Yggdrasils, Skálmöld has always driven their music by undertones of dreary nordic chants or traditional music patterns. And yet, even with their trademark sound augmented with their signature harsh vocals and ferocious riffing on their latest effort Sorgir, there’s just something that feels off.
While it would be an insult to call this album bad, there were admittedly some recurring aspects that contributed to the parts of this music that felt out of place. Firstly, the vocals, while they have the same savage bite that has always made Skálmöld’s sound, something feels different. Certain tracks like “Brunin” and “Gangari”, personify a type of shouting growl that somehow reminds me a bit of the unpleasant almost self-pitying type of anger that the vocals use in Metalcore songs. For some reason the vocals, sound like teen anger more than the berserker rage previous albums featured. But it’s very subtle, and the whiny rasps backing up the main vocals are part of what invited the comparison. However, since two tracks are not enough to spoil the album, and since the rest of the album has such a flawless delivery, especially on the opening track, “Ljosid”, I won’t complain too much.
The next thing to address is repetition. I have really gone off on tangents about tedious repetition, however, it should be noted that a lot of folk music thrives on repetition. In fact, Irish reels are essentially two musical phrases repeated in a pattern with little variation. Since many Celtic inspired Folk Metal bands have managed to pull off song structures of this sort, it has to be said repetition does not constitute redundancy, provided the music itself is good. And in the past, Skálmöld albums have brilliantly sidestepped tedium through the use of choirs, varying up the interplay of instruments or just straight up talented songwriting. But several tracks here have parts where the same riff starts feeling repetitive because nothing’s going on, or occasionally, the songs just feel like you could cut parts without losing quality. The former is the case on the closing track, “Mori”, and the latter is the case to varying degrees on most of the tracks. But still, only, “Mori” really feels like the quality is significantly altered by the repetition. The other tracks just occasionally plod but then kick back into overdrive, which brings me to the most enjoyable part of the album – its aggression.
Overall, Sorgir does exceptionally well in one specific aspect that I feel could have elevated it above the rest of Skálmöld’s catalogue. The brutality and the aggression that songs like the opener, “Ljorsid”, and other tracks like, “Brunin”, or “Gangari”, reach is enough to trigger windmilling as an autonomous reaction. On this album, if the riffing speeds up, it blazes along like slepnir on speed. Musically, the more extreme bits are reminiscent of wailing, heavier Thrash Metal which could be why it induces the desire to jump off tables and just generally go nuts while listening to it. On some of the tracks where this frenzied pace is the norm, parts where the same riff repeats are bearable just because of the fury of the sound.
In all honesty, this album could have been one of Skálmöld’s best works just because of how effectively they managed to enhance everything that’s great about their music. The choirs are there, and they sound as nordic as always, delivered with the air of funeral laments, and they seem to know when and where they belong. The ferocity and extremity of the songs, I think, fit the typical attitude and direction I think the album was taking well. Sorgir is everything Baldur established, and their other albums helped codify, taken into a direction that feels like a very natural one. Yet, there are just those one or two minor problems that have unfortunately prevented this album from achieving the greatness it deserves, but nonetheless the album remains a great release.