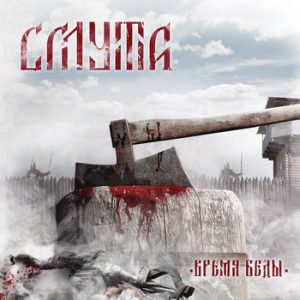 This is yet another first for me with Smuta “Vremja Bedy” (Troubled Times or The Time of Troubles depending on whom you ask). Side note, that album title is just another saying for the word ‘Smuta’. How clever, and even though Smuta is a solid well-established band, the cleverness stops at the name.
Let’s just say, I was not initially receptive to this album, and I blame myself. Still trying to get into a rhythm, pun intended, with this reviewing thing and having to admit that ultimately music is subjective. From now on, I vow to listen to albums for review in my car with awesome Rockford Fosgate system rather than dinky headphones at work. Nonetheless, the subjectivity is present even for one individual; one day you hate something and another you can see (read hear) the beauty. Well enough of that.
This is Smuta’s sixth full length album, and it’s quite approachable for the average folk metal fan. There are clear indications of strong folk influences between the flute and keys with mid-paced pagan distorted guitars. You know what isn’t folk however? The clean vocals. Now, I did my homework and listened to their other albums; this theme is consistent. The clean vocals sometimes back the guitars and at other times, reflect the keys as well as heavy vocals. The songs are sometimes catchy, but rather simple with only a few chord and rhythm progressions throughout each track and this multi-layer single-themed approach for the melodic instruments. This is all fine and many will really enjoy it and as mentioned, it is a solid band with a solid discography.
I would say this album is less heavy than some previous ones, with more clean vocals, lighter rhythm, less grime, grit and grunge. The first song, Russian Riot, is very catchy and inspires a few repeats. The River has a very pretty flute, but darn it, the clean vocals completely take over and although that can be nice, she’s no Masha Scream :/ Let’s just say, I wish Maria would allow the instruments have their place in the melody and kept to the flute. Reading more about Smuta, paints a clearer picture of their songwriting. Smutnoe Vremja saw something like one third of the population perishing and this ensemble certainly holds a somber atmosphere throughout, worth the quick Googling. The remaining songs follow suit and I am a big fan of Evgeny’s growls in The Cross and the Sun, very deep with a full sound on a decent heavy track. He even adds a little clean voice at the beginning of To Wade Through. I Will Fly seemingly is intended as a more ‘acoustic’ folklorish ballad to which I scoff again, that even though the lyrics are such, the singing style is more opera-like. Smuta released a neat video for the title track that I recommend checking out to gain an understanding of the bands overall style. The Memory again starts with and carries a beautiful flute melody.
All the track lengths are about 3-4 mins which is more than enough given the simplicity. Tear to Shreds would probably take the cake for heaviest track, not bad, but nothing that hasn’t been done before. To round it out, Go Away you Sorrow and Anxiety was my favorite, even with the excessive clean vocals from Miss Smolya.
To summarize, this is a well-thought out and produced album with straightforward composition and basic harmonic progressions. Unfortunately, few features stand out, unless it’s the clean vocals and that’s your thing like Epica or something in which case, I recommend Maria get additional vocal training to expand the range and technicality for harmonizing with the melodies in an interesting way.
There are just too many great metal acts out there so I promise to be choosy next time, I really hate being mean like this.