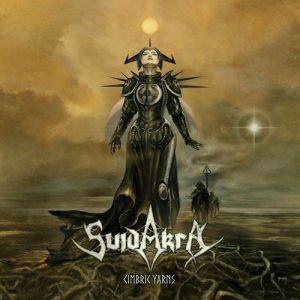 After over a dozen releases of relentless Celtic influenced Death Metal I’m sure everybody is wondering what Suidakra’s first ever fully acoustic album will sound like. Don’t expend any valuable seconds on the question, it’s their Black Album. To be honest while I did kind of anticipate that a exponential decline in quality was a distinct possibility, as we have seen so many times when bands try something new and ambitious, but I did have high hopes. After all, there have been acoustic rock songs that still – well – rocked. Just look at the likes of Jethro Tull and Led Zeppelin. As for acoustic Metal songs, some of Blind Guardian’s more popular works also show that experimentation can still result in something that has a semblance of the typical music performed. And I understand completely that Arkadius Antonik’s other projects and their recent release Realms of Odoric have veered very close to the Avantasia cinematic approach to album making, but it still kept the band’s typical celtic influenced gothenburg sound. For those who don’t know, Suidakra’s new album, Cimbric Yarns, is a prequel to Realms of Odoric, but in terms of sound, it feels like the polar opposite of its predecessor.

Cimbric Yarns arguably starts out strong but at the same time doesn’t. In hindsight, the opening instrumental, “Echtra”, with its spoken word introduction for the story could very easily pass for one of the other songs, because it follows the same formula as the songwriting except there is an awkward cutoff at the end of it. At first I thought that the transition between tracks was just a bit off like with the spoken introductions on live albums or the spotify versions of old Rhapsody releases, but this isn’t the case; the next track shows that, “Echtra”, just ended abruptly. Returning to my comment about the aforementioned track following the same formula as most of the other songs, I will just mention the two types of songs present on this album before highlighting each one and the overall approach: the first type of song is the folk-inspired tracks, and the second type are ballads.Looking at the more folkish tracks, the first real song, “Serpentine Origins”, exemplifies more or less the mold all the songs other than the ballads follow, with an ominous and spooky opening followed by medieval sounding acoustic plinking backing up the story driven vocals. It is important to note that they back up the vocals because almost universally the presence of music Cimbric Yarns seems to supplement the story conveyed by the lyrics. While I’ve said before good vocals can greatly improve a song’s quality, which it does in the case of “Serpentine Origins”, it can also have the effect of butchering a song completely as with the track, “Craoine Crac”, which had the most potential of any song on the album. While on the topic of song openings, let me highlight the one song where the bass driven riffs and imposing atmosphere did stay throughout the song. “Black Dawn”, is one of the more conventionally Metal releases of the album. If you played it and then compared it to a rock song like, “Jack in the Green”, by Jethro Tull, you’d see that both have the fundamental musical characteristics of their genres Metal and Rock respectively except played acoustically. It is this departure from a lot of the Metal conventions that make Cimbric Yarns Suidakra’s Black Album as opposed to just musical experimentation. But of course term Black Album has implications of commercial outreach that manifests itself on this album by the heavy inclusion of ballads.
There are two kinds of ballads present in Rock music in general: Power Ballads with slow and thundering guitars, and that other kind of ballad. Maybe its just because its an acoustic album, but the bulk of the songs on Cimbric Yarns seem like the guitar driven equivalent of 80s rock ballads. Once again, it is a case of the music supplementing the vocals. And even among these ballads, which comprise almost half the content of the album, there is once again another example of a decent Metal sound played acoustically in, “At Nine Light Night”, which has the same imposing bass undertones and dissonant heaviness of, “Black Dawn”.

Finally, I think its safe to say this album isn’t anywhere near the area of Metal. Musically, it still has some brilliant folk tracks that are sadly overshadowed by an overemphasis on story. I will admit the score may be a bit hash considering that despite all of the album’s shortcomings, the vocals are performed seamlessly, the atmosphere feels very consistent with the lyrical and thematic content, and there are moments of brilliance here and there. I have a feeling that this album will be especially divisive and will still have some fans who will latch onto it, praising it for all the innovation and depth it has, and then there will be others who more or less agree with my view. For those who are willing to give a try to something so radically different, watch the music video for, “Snakehenge”. It gives you a feel for the majority of the album and is actually one of the more creative tracks on here.