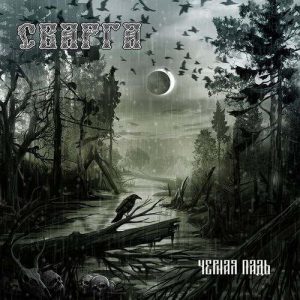 As my very first Folk-Metal.nl review, I tried, I tried really, very hard to give this album several unbiased listens, mostly in an effort to expand my current tastes and perspective. In fact, I had barely heard of Svarga prior to reviewing this album. Which is an absolute shame as a proclaimed Russian metalhead. If you’re like me, Svarga is seemingly characterized as a pagan-metal ensemble and Черная Падь pronounced, Cheornaja Pad’, meaning Black Fallen Soot is their fourth full-length release among countless other EPs and collaborations.
Even through my optimism, this particular album came up short, but not for obvious reasons like poor production of lack of talent. No. It is just not for me. The song writing is done well, the individual components are solid, and the production quality is quite impressive. However, the speed and intricacies are lacking for this Trollfest, Leshak and Svartby addict. Had I heard this 15/20 years ago, I probably would have enjoyed it as an angsty teenager.
The first song, Прах Над Прудами “Prah Nad Prudami” (Dust over Ponds) was an interesting start, with a fantastic build-up and memorable riffs, although already overwhelmed by the amount of clean vocals. On the plus side, some string melodies remind me of Arkona and the brief acoustic solo before the guitar kicks in is a treat. Звери Осени “Zveri Osenni” (Autumn Animals) also had a nice melodic intro but again drowned in clean vocals which this time are a bit basic; I become quickly bored. This pattern continues with clean vocals increasing with every melancholy song despite near-unnoticeable traces of heavy growls, and remind me of 80s Russian hard-rock band, Chernyj Kofe. Not a bad thing, of course. The title track has an awesome accordion intro, which I am desperately hoping is followed by a heavy riff breakdown but alas, another ballad begins. Листья на воде “Listja Na Vode” (Leaves on the Water) is the track I had been waiting for all album; solemn intro followed by a serious blast beat and menacing growling. This would end up as my favorite track, so much so, it now permanently resides in my library. Меречь “Marech’” (Measurement) has nice progressions between heavy and ballady but he only growls once. The last song is yet again depressing and makes me regret this reviewing decision, even if I appreciated the acoustic instruments.
Overall, this is a solid album, and I will eventually explore the rest of Svarga’s discography but I’m definitely not in a hurry to do so. This type of metal requires a certain mood, one that I don’t often carry.