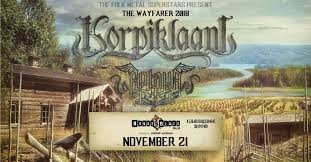 After spending several minutes trying to claim my ticket at the box office, I was very excited to finally get to see Korpiklaani live. While it did turn out to be a relatively short night and in some ways neither show truly sped up until late in each band’s respective setlist, the night was still enjoyable and the music was seamless for the most part.

Arkona
The lights dimmed, a droning guttural chanting track played, and a figure in a death shroud appeared on stage proceeding to then deliver a evil sounding chant while beating a heavy drum. Even after the rest of the band came on stage and the front-woman threw off her hood and charged through the first three songs, there was something primal and sinister that carried over from the eerie start that made Arkona’s on stage presence a true spectacle. Midway through the set, the band toned down the pagan fury and the show gained more of a party atmosphere. Throughout the last three songs, the entire room was clapping, jumping, and skipping around in a mosh pit (yes, they were skipping in the mosh pit). I maintain Arkona’s musicians are endowed with the spirit of folk metal just by how they managed to slip off stage between songs while the lead singer continued chanting like a deranged shaman (one of the times I didn’t even notice how or when the guitarist left, spooky). By the time Arkona left the stage the crowd was so charged up that they were cheering for the slightest disturbance from the stage. Clearly, the opening act had managed to set the perfect conditions in the audience for Korpiklaani’s signature style of music.
Rating: 9/10

Korpiklaani
In contrast to Arkona, Korpiklaani arguably didn’t really gain momentum until later in their set. The fans were noticeably more enthusiastic about them; however, Korpiklaani didn’t engage the crowd for audience participation enough, as the crowd would sometimes work itself up into fist pumping and then stop abruptly when the band didn’t engage them. In terms of audience participation, things became better quickly, but I feel that in the end the crowd had a lot of unspent energy. The music was seamless, but the vocals sounded like a whisper. I don’t know if it was a technical thing or if Jonne just wasn’t belting out the words properly, but the vocals were unusually soft. That didn’t stop some of the audience from singing along to “Beer Beer” and “Vodka” though. Musically Korpiklaani had an excellent performance, but they just didn’t make use of the latent energy among the fans to the extent that they potentially could.
Rating: 7/10