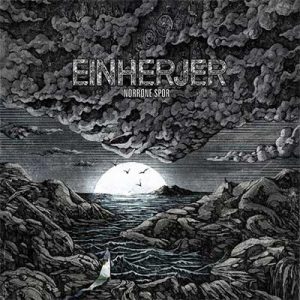 There are some bands out there that have never gotten the amount of recognition they truly deserve and Einherjer would definitely be one of them in my opinion. I scratched my head a little bit and thought of two potential reasons (albeit not really great ones)…..a pretty large span of dormancy (2003-2011) and what I perceive as a decent amount of style changes. I was knee deep into the beginnings of Einherjer back in the 90’s with “Dragons Of The North” and “Odin Owns Ye All” being on constant repeat. Over time changing lineups, most notably with guitarist Frode Glesnes becoming vocalist since the early 2000’s and bassist, altered their sound dramatically and for a much larger part of their career. The reissue and re-recording of “Dragons Of The North” in 2016 I think was an amazing way of bringing them full circle and reintroducing them if you will. And now they are ready to unleash their latest opus “Norrøne Spor” in November on Indie Recordings which I will translate as “Norse Tracks”. The album has 11 tracks at over 52 minutes and I would say may be their most skull crushing yet. There is no escaping the wrath on this one as track after track is in your face with impending doom. Comparatively I feel they have as much in common with classic Norwegian black metal In Satyricon and Enslaved as they do with more contemporary based acts like Grand Magus, Forefather and King Of Asgard. The tracks have more brooding and punch than speed and frenzy which I would say could tend to give you the opinion of not being “Viking metal” is fair as I think they offer a different take. With tracks in both English and Norwegian, “Norrøne Spor” has a solid overall style while not being overly complicated but built upon sturdy riffs and pounding beats. Highlights for me were the epic “Spre Vingene” (“Spread The Wings”) the crushing “Døden Tar Ingen Fangar” (“Death Takes No Prisoners”) and a killer cover of “Deaf Forever” by the legendary Motorhead. While this is an enjoyable album, it was not one that instantly grabbed me and made me want to listen repeatedly like some other albums for me this year. Not really sure why as this has everything going for it but just didn’t stay with me after a listen or two. It has a decent overall mix and production and has enough crossover appeal for the regular metal fan, so I think it could be just me. If you are looking for an accessible, heavy solid metal album I think “Norrøne Spor” is one to give a listen to…..