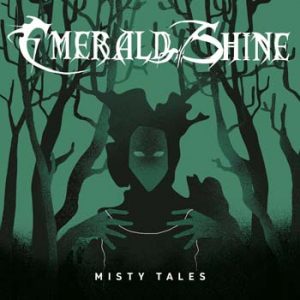 It’s almost three years ago since we received an album of Emerald Shine. Their first release was an EP called ‘Beneath the Stars’, and it was an OK-one. Nice to listen to.
Let’s check the remarks of our man Rein about the EP, and compare them with this album ‘Misty Tales’.
This is still the true folk-metal, we’re used to by themm tough with that light-footed feel.
There quite some changes in the line-up, which would certainly have influenced their music.
The melodies were already nice, and they’re at least as good as on ‘Beneath the Stars’. My compliment for making a full length album which contains such distinct song as on ‘Misty Tales’. The band had a large ‘authentic department’ and they still have. They have downsized from an 8- to a 6 piece, but this didn’t affect the variety of the the instrument. They still use violin, harp and tin whistle, but there’s only one violin in the band now. With Leena on tin whistle, vocals and guitars, the band has the opportunity to use different instruments, without the risk to use them all at the same time, causing things to disappear in the mix.
The changes in the vocal section of the band solved their problem with the bad English in the clean vocals. Speaking about the vocals, the band uses a wide range of vocals, harsh male and female vocals and clean male vocals, in all sorts of combinations. Great to have these kind of skilled voices in one band. Take a song like ‘The Elven King’ and you’ll be amazed by all these voices. A truly very nice song with all kind of elements, skillfully put together to a very varied song.
And taking the same song as an example, Emerald Shine solved the problem with all these instruments as well. You can hear lots of harp in some pieces, and it has gotten a larger role overall in their music. In ‘Voice of the Muse’ the clear notes of the harp can be heard everywhere. In combination with the distorted guitars it creates an awesome effect.
The album ends with ‘Rainy Night’, in my opinion the best song of their EP, and I think the band thinks the same. A fine track to compare both releases, and the key word is matured.
The band has obviously grown a lot over the years and the changes in the line-up were certainly for the good. They have matured, and despite the fact they have to do everything on their own, since they’re not with a label, the album has a very fine quality.