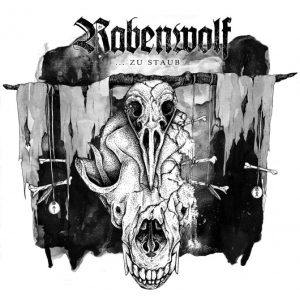 Basic facts first. Rabenwolf is a seven piece band from the North of Germany, releasing their second full album in their 11 years of existence. They describe their music as a mixture of folk, black and rock ‘n roll. To my taste the pagan and folk influences are far bigger than black metal or rock ‘n roll. Having seen the band on Ragnarök a few years ago, it’s interesting to find out how they have evolved. The band has taken its time for this album. That’s perfectly reflected in production and song structures. Rabenwolf have played some of the songs on ‘…zu Staub’ for many years and know how to play it to get a positive reaction.

An instrumental start with ‘Was uns bleibt’. It sets the mood rather nicely. After this little piece you would expect long epic songs to follow in the wake of Moonsorrow or Finsterforst. And you wouldn’t be entirely wrong, although most songs do not exceed the 6 minute mark. First real song ‘Staub’ is an example of songs the band have played live for quite some time. Listening to this song gives you a good idea of what the band stands for. Folk influences by flutes and piano, both harsh and clean male vocals in the band’s native language. If you like ‘Staub’, you are hereby advised to listen to the entire album. If you hate it, stop listening straight away.

‘Der Turm’ for me is the absolute star of the album. High pitched guitar melodies played in a Manegarm-way. Nice twists in speed and mood. Pretty aggressive and then again with a lot of feeling. Great stuff. On ‘Ein Letztes Geleit’ we finally get a bit of the rock ‘n roll we were promised. A more prominent place for the bass, immediately making the song swinging more than most other parts. On ‘Gezeiten’ you get a balanced mix of the band’s abilities. Starting with piano we furthermore get flute, acoustic guitars and partly clean vocals. And indeed, very talented guitar lines. Melodic, without getting cheesy in any way.

The rest of the album is more or less the same story. Not all songs are equally memorable. It would be exaggerating to call these fillers, but fact is that the album would be better if one of the songs (for instance ‘Sturmzeit’) would be left out. The album would still be long enough and would have a more consistent level. Last song ‘Lichter Des Morgens’ is another story, though. Five minutes of varied folky pagan music. Great melodies, lots of double bass, harmony singing, plenty of variation within the song.

Rabenwolf plays within known borders. Not a band to change the scene in any way. And I don’t believe that is what they strive for. Write proper songs, execute them well, bring it to the stage and have a good time. In all these aspects Rabenwolf have exceeded my expectations. Keep it up. The world needs likeable stuff like this.