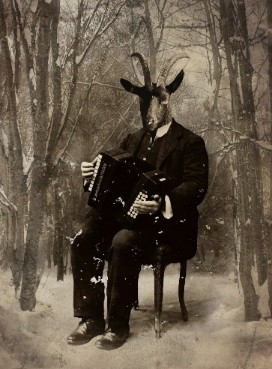 It has been another amazing year in folk and other related metals, especially for Italian label Avantgarde. They have released at least 2 albums for my top 10 list of 2018 (Sojourner’s “The Shadowed Road” and Windfaerer’s “Alma”) plus a vast history of more extreme projects. They quite possibly may be adding a 3rd album to my top 10 with the 2nd studio album from the Italian forest dwellers in Selvans. Entitled “Faunalia” the sophomore effort has 6 tracks at 56 minutes of music so a whopping average of over 9 minutes per. It has been 3 years since their debut full length “Lupercalia” emerged and “Faunalia” seems to be the sequel and sees some more dark tales being spewed forth. 3 years is a long layoff, although they did put out a live album (“Hipri”) and an epic collaboration with Downfall Of Nur before the new album. Description wise, I would still go to more black metal acts like Dimmu Borgir or Cradle Of Filth first before anything else but imagine adding in some folky instrumentation, namely woodwinds like flute and tibia and some various percussive ones. There is an obligatory intro piece (the shortest track here in the 3 minute “Ad Malum Finem”) before you get into the 5 main tracks with 2 topping the 14 minutes mark (“Magna Mater Maior Mons” and “Requiem Aprutii”) After repeated listens I have found a lot I enjoyed about the album……some of the stark passages in the longer tracks, the Latin lyrics (yes Latin….very ambitious) and the messages /stories within and just the overall mood of the album. I think the only concern I had was the overuse of keyboards and a more “gothic” vibe….even with the album still being relatively heavy, it almost started to sound very soundtrack-like to me and potentially lose some of the intensity and bordering on satirical. Dare I say some of passages started reminding a little of Ghost and definitely COF, which not a bad thing at all but definitely not folk metal. “Phersu” specifically had some strange choices when it came to the keyboard styles chosen and killed the mood for me. As great as the vocals (both primary and choral) are, the riffing, blast beats and folk instrumentation, they don’t outweigh the negatives. I had hoped for another mysterious journey but it seems that Selvans have opted for a more accessible approach on this album….while still heavy it does not have the allure that “Lupercalia” did for me.
A good album but unfortunately, I don’t see it entering my top 10 with their label mates for 2018.
If you happen to like some of the more popular black metal acts, then I could see Selvans being one to check out.