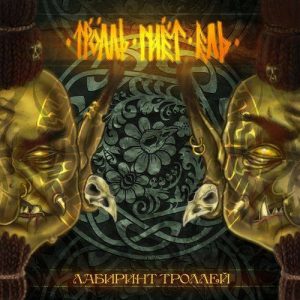 Just looking at the name Troll Bends Fir makes one expect another bouncy troll themed act that takes cues from the likes of Finntroll and Trollfest. While there certainly is a strong presence of upbeat polka-like dance tunes that are no doubt influenced by Finntroll, and while they self-describe their music as, “Beer Metal”, I found that Troll Bends Fir had a much broader range of influences on their cover album Troll Maze. In fact, in addition to a good number of songs about Samhain and the supernatural, it has a unique sound with the sole disadvantage being the sheer range of different musical approaches that the band brings to the table.
Looking at the songs on the album itself, Troll Maze opens with the aptly named, “Beer Song”, which, in truth, has more of a rock feel than a Metal one. It establishes a reoccurring upbeat dance motif that is somewhat reminiscent of polka, and brings back to mind the music of Finntroll. Whether the similarity to the aforementioned Folk Metal pioneers are were already present in the original songs, or whether the cover songs were just performed in a style that hearkens back to their humppa sound is debatable. However, there are several more songs performed in this style: “Trolls Dances”, “Snake Watches for the Hamster”, and “Two Drunken Gals”. Of the category, “Snake Watches for the Hamster”, may be the only song that has significant issues. While the problem is more subjective, of all the songs that sound like folk dances, this one actually feels like a recycled Finntroll derivative. Yet, the song is still performed with a lot of passion and skillful execution, so the style becomes more of a peeve than an actual irritant.
Among the other cover songs are those that have a happy feel, reminiscent of Tuatha De Danann. The most significant song in this category is, “From the Other Side of the Earth”, which is flawless aside from the gravelly male vocals that accompany the female ones. The vocalists have both shown that they can sing an almost operatically smooth style on songs like, “Power”, which make me wonder whether it was their intent to do the vocals like that, or if they just followed the original song. Of these distinctly happy songs, it is interesting to note the vocals are by far the catchiest (almost to the extent of the more melodic Stratovarius albums), and many of them sound like the sort of thing one might sing in an open field, while holding hands in a circle. That being said, some people are put off by that level of campy happiness. But even then, there is a vibrant energy to the music that cancels out any initial adverse reactions.
The last category of songs are comprised of several tracks about samhain and the song, “Lord of the Forest”. Of these pieces, the latter is the best, as the tone of the music matches the subject matter perfectly. Despite this, “Lord of the Forest”, also has the biggest flaw of the supernaturally themed songs. It fails to keep the momentum throughout the song, and is the only song on this album where my attention wasn’t locked on the music by its own exuberant charm. Of the other two songs of this category, “Black Samhain”, and, “Lights of Samhain”, both are of the same caliber as the rest of the album musically, although “Black Samhain”, is an oddity. It features what sounds like bongos for most of the intro, and overall sound of the song reminds me of, “No Quarter”, by Led Zeppelin, although for the life of me I can’t pin it down due to the radically different instrumentations and styles. The dissonance between, “Black Samhain”, and the other tracks, makes it feel a bit out of place on Troll Maze even though it is a cover album.
Simply because the album is so great overall, the few flaws mentioned are forgivable. Troll Maze embodies all the energy of Korpiklaani, the polished delivery of Tyr, and the cheer and optimism of Tuatha De Danann in one bombastic release.