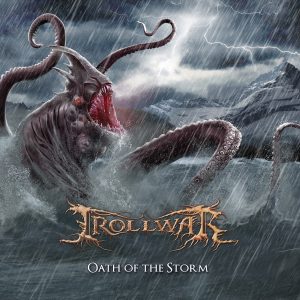 Time is a hard concept to comprehend and here is why…..I just looked up when the debut full length “Earthdawn Groves” by Trollwar came out and it was “only” 5 years ago as it seems like forever. Prepare for a folk metal pummeling by these French-Canadians as finally their full length follow up is about to hit. Titled “Oath Of The Storm”, the independently released album will be packed with 12 tracks at almost 55 minutes. It’s not like they haven’t been working on things like the epic split with Trobar and Distoriam and the killer EP “The Traveler’s Path” both from 2017. Speaking of the EP, you will find the 4 main tracks from it (“The Forsaken One”, “Omens Of Victory”, “Forgotten” and “Shores Of Madness”) on “Oath Of The Storm” plus 5 more with obligatory intro and outro. Quebec has a solid foundation of folk metal and associated acts like Nordheim, Valfreya, Talamyus plus numerous others and Trollwar is as killer as all of them. I could probably string a long line of metal subgenres and styles together to describe their sound such as epic symphonic black folk metal and I’m probably leaving a few out. This 7 piece from Alma packs tons of music into every track without being super progressive and allowing everything to have a proper place in the songs. As far as comparative acts you have to look at the other acts with potentially a large lineup and maybe a slightly heavier than normal folk metal sound…..how about a mix of Winterhymn, Dimmu Borgir (definitely the more classic stuff), Baldrs Draumar, Vorgrum and Varang Nord? Yowzer. Killer for sure. I think hearing BD and Varang Nord would be a tip off that accordion would be the main folk metal instrument and you would be right along with keys augmenting the folk metalness. I like progressive music but thankfully Trollwar does not opt for complicated time signatures and arrangements but more catchy and heavy tracks with average lengths. Going back and listening to “Earthdawn…” for the 1000th time and comparing the new songs shows the refinement in their sound from both a songwriting and recording perspective. Everything is tighter and less cacophonous and heavier than ever with riffs actually making more seamless transitions into one another. Is an example necessary? “Hymn For The Vanquished” has been reworked for “Oath…” and you can absolutely hear the difference even in the first few seconds. There are so many highlights that I had a hard time picking just one out….the blast beats, the guitar and bass work, the gritty semi black metal and clean vocals…..just tons of great things going on here. So, let us say you like one Trollwar track, you are going to like them all as they never miss an opportunity to have everyone highlighted in every track. This late into 2018 rarely sees a band sneak into my top 10 but then again Nordheim did it last year with “RapThor” so following their template has proven successful for Trollwar…..an epic album to cap an epic year and probably a top 10 album for me for 2018.