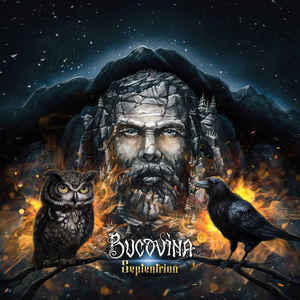 I know I may have been a tad harsh on my last Bucovina review in 2015 for their previous album “Nestramutat” and for good reason. The album just was missing something and now a follow up album had me wondering if they have turned up their effort. Indeed, they have. “Septentrion” was released in the beginning of December and they have crushed it with this new one. Featuring 10 tracks in total at just under 50 minutes, the album is their 4th full length and they are still an independent act which I think will change soon (if they want to). While I would not say they are a “classic” folk metal act, there is something about their sound that has a folky vibe to it. There are no folk instruments listed or heard as they are a standard guitar, bass, drums and vocal band. Sonically I think TYR is a pretty decent comparison but less progressive and riffy or maybe some Skalmold or Manegarm…..somewhere in that general area. The tracks are sung in their native tongue (Romanian) with one bonus track sung in Norwegian and the translation I got for the album title is “North” which is French in origin……around the world they have gone it seems. While not drastically different than their previous albums, “Septentrion” has stronger song writing and structure to me with tracks that are much more memorable and catchier. They have fused a lot of different parts together in their arsenal to make for more dramatic listening….for example the use of heavier and clean vocals in tracks like “Aşteaptă-Mă Dincolo (De Moarte)” (“Wait Me Beyond (Death)”) are extremely polished. They also have done a nice build up in each track….guitar riffing progressing into main riff and into vocals….I know it seems like a simple formula and everyone does it I guess but Bucovina really reels you in on every track. I wouldn’t say you will hear anything that will blow your mind other than consistently good tracks across the board. Remember that track in Norwegian I mentioned earlier? Closing bonus track is titled “Vinterdoden” which is not to be confused with the Helheim track (although V’Gandr from Helheim did actually write the lyrics) and maybe the most unique of all the tracks here but not dramatically so. All in all, I enjoyed this album and think it is their strongest outing to date which includes a nice thick and clean overall sound to the album. While too late to be an album of the year candidate it is certainly one I will be listening to often in 2019.