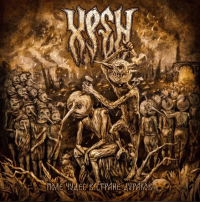 Khren released their first album ‘Pole Chudes V Strane Durakov’. This means something like field of miracles in the land of fools, according to google translate.
But I won’t call this a debut album, yes, it’s the first one of Khren. But Khren is build on the ashes of Eldiarn. After some changes in the line-up and style, the band has returned to the folk-metal and judging from this album, that’s a good decision.
The style is in the line with their Eldiarn work. On the album we can hear an almost complete Eldiarn line-up. So, nice riffs and harsh vocals are some of the things you can expect. You can’t get bored by the guitars, because they’re nice and grab you attention everywhere. The vocals is something different. They’re nice as well, and I have to admit here I’m not a huge fan of these kind of vocals, they tend to to bore me after a few songs.
The songs sound nice as they are, but what makes them special is the violin. The violin-parts are very into-your-face in the mix, which gives the music of Khren a special feel.
Great album, I hope these guys can get a stable line-up and make many albums in the future.