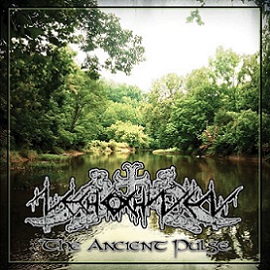 I’m sure on some level people may be surprised to see a Nechochwen review on our site.  I have been a fan for a long time and reviewed the last album on here (2015’s “Heart Of Akamon”) and had a nice interview with them as well. Are they folk metal per se? I would tend to say at times they could be, but they offer many facets to their sound so no one genre is going to constrain them. Prove positive is now offered in “The Ancient Pulse”which offers listeners a look at the Nechochwen catalog and some previously unreleased material. Released via Bindrune, I believe most of the tracks here I have heard at one point or another via Bandcamp or downloads from them with most being tracks from their previous 3 releases prior to “Heart…” (“Oto”,“Azimuths To The Otherworld” and “Algonkian Mythos”) Being from West Virginia here in the US, they have been included in a growing scene from Appalachia (a mountain area stretching along most of the east coast) with many acts from Maine to Georgia. Acts such as Appalachian Winter, Twilight Fauna, Panopticon, Sun and Moon Dance (who’s last album featured the amazing Runahild) and Falls Of Rauros fuse music from here (a mix of bluegrass, country and European traditional) into more extreme metal forms. Nechochwen do all of this plus base it all in a native American influenced sound  and I would say primarily acoustic with some metal. If you know their earlier work, you can tell that tracks here have been either remixed and/or re-recorded for this and I think a lot of the older tracks benefit from it. For example, “Fallen Timbers” has a little more reverb than the previous version and gives it more depth. The single “Winterstrife” from 2010 has a more up-front sound to the new version and definitely more audibility. Even if you have these tracks in your collection to hear them dusted off so to speak is well worth the investment. And if that wasn’t enough,they have gone into the vaults and done 2 killer covers and more different they could not be……”One With The Forest” by Rotting Christ from their 1996 album “Triarchy Of The Lost Lovers” and “Over The Mountain” by Ozzy from his epic“Diary Of A Madman” album. Both versions get a solid treatment and show their more “extreme” side. You will still hear a pretty diverse selection of music from primarily acoustic based to heavy/almost black metal material which shows they can crush it no matter what. For Nechochwen fans from the early days until now, you may not see a huge value in this other than it all being in package and the better sound. New to Nechochwen? This is a great way to experience all they have to offer and their unique take on blending folk,traditional and metal music.