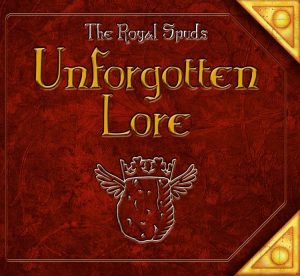 The Royal Spuds hail from Leiden in the West of Holland. They have been around since 2012 and have a fairly traditional sound for a Celtic Punk band. The guitars are suitably loud, The singer has a nice rasp in his voice and the traditional instruments shine. When the band gets everything just right as in” A Man”, they are well worth a listen.” Johnny Jump Up” is a favorite of mine and the bands take is quite good. The whistles throughout the album really shine and I also enjoyed the banjo work. The track “Alley In Killarney” has a nice feel and fun lyrics.” I’m To Old For This” is a well oiled punk song and “The Last Wild Haggis” is pleasant enough. I enjoyed the album overall but there are a few things I don’t like. The album is really only 6 tracks if you don’t include the intro, (Which I don’t) . I do give mad props for the flute work which does have a nice Jethro Tull vibe to it. The song has a strong 70’s Tull sound and I hope the band keeps experimenting and pushing the limits. So overall the band sounds good and there are a few great tracks. Props for the first progressive folk song I’ve heard like this in a long while

It was brought to my attention that I made a mistake in my review of The Royal Spuds Unforgotten Lore. Apparently I got a file of the song Tri Martolod that somehow repeats the song 4 times. I have no idea how that happened but I found out the song is actually only a little over 6 minutes and in that context it is a much better song. I still think it sounds very Jethro Tull which is a good thing. I’m sorry that I got it wrong and in light of this I think the album comes out a bit more strongly I would give it a solid 8 and again my apologies to the band. Slainte.