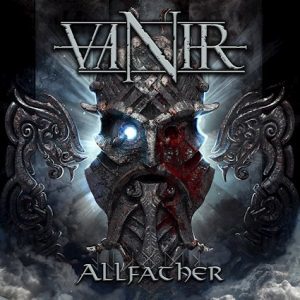 Without looking beyond their promotional material, one would never suspect Vanir of having melodic death metal tendencies. One might instead expect more conventional Viking Metal. But nonetheless I discovered their music is fairly reminiscent of Amon Amarth or even Wulfgar in places. For all the clear melodic death metal influences there is one important advantage Allfather has that puts it ahead of typical music from the genre: there is no repetitive formula at work here.

For example, aside from the openingtrack, “Væringiar”, and the solo on the next track, “Svoldir”, (which do infact sound like they recycled the same instrumental loop over and over) there is little that can be described as repetitive, let alone formulaic. There is also a healthy change in approach to every song. The afore mentioned track, ‘Svoldir’, for example, sounds significantly more brutal in comparison to the opening track, and “Final Stand”, has a more folkish feel and is catchy enough to be used for an audience participation song live. The main strength of ‘Allfatherlies’ mainly in this musical switchboard of influences; no individual shortcoming can threaten the quality of this album as they are neutralized by the next song. Even if the same problem occurs later, you’ve already forgotten about it until you go back and listen again. Yet ‘Allfather’ does have its achilles heel, the vocals,

At this point I want to further clarify why I compared the album to straight up melodic death metal. The vocals sound like generic melodeath growls. This is probably not due to a lack of skill on the vocalist’s part as he does show character to his voice in, ‘FinalStand’, and ‘Shield Wall’; raising the question of whether this was their intent or whether the vocals are a result of production. There are some layered growls in one of the opening tracks that sound like proper death metal growls, and in the song, ‘Svoldir’, I hear more bite to the vocals. While the vocals are by no stretch bad, it is just a bit disappointing that there is such a huge divide between the originality of the instrumental music and the vocal music.