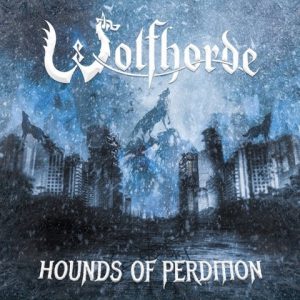 A year after the EP in which they celebrate Finnish great metal bands Moonsorrow, Amorphis and Finntroll, Wolfhorde is back with a full album. The EP showed craftmanship, although I couldn’t quite understand why the band made the choices they made. That’s water under the bridge. The new stuff is all that matters now. And that’s not bad at all!

By definition, at your beloved site, folk metal is the subject. Until now Wolfhorde fully fell into this category. Hounds of perdition is a bit of a change for the band. Especially the folk instruments are lacking. I had quite a hard time discovering flutes, violins, bagpipes or anything like it. Instead mainly keyboards accompany the classical instruments. What has remained the same is the mix of harsh and clean vocals. In ‘Doctor of the plague’ this works very well. As mentioned often before, contrasts is what makes music interesting. And that’s exactly what happens in this song. Not only in the vocals, but also in speed and the way the song is structured. Heavy to a certain extent and then a peaceful break. This song represents the album just fine.

Only seven songs on the album, altogether 43 minutes. In my book that is a sign for quality over quantity. First and last song measure over 9 and 11 minutes. These songs require a certain mood to appreciate. Not songs for the background while doing something else. Really songs to listen to with all your attention. Doing that, I am confident that you will acknowledge the ability of the performers. All skilled musicians and definitely working together as a band. No room for progressive lone wolves here. The question remains whether the band should play these songs live. I live in hope to experience this somewhere in the future.

Production is crisp. The art work, hm, not entirely convincing. On the musical side of things, we have heard it all before. And we have heard it better. Last point of complaint: there really isn’t a song that grabs you by the throat. Not one piece that you immediately want your best mate to listen to. Having said that, Hounds of perdition is well made, varied, accessible. Not many folks will hate it. And not many will consider it for album of the year.