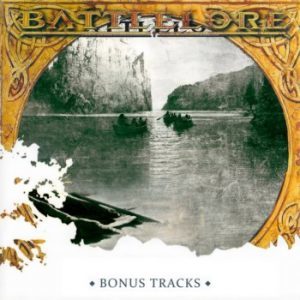 I’m not sure if this is going to be a trend but if it is, I hope it ends as quickly as it started. That trend is the release of unreleased older tracks instead of new material, especially after a long time with nothing at all. Recently, I just reviewed a “new” Oakenshield EP consisting of tracks from 2010 released at the end of 2018. Now, we have the epic Battlelore from Finland taking tracks and putting them out there in a release entitled “Bonus Tracks”…..and at least they are calling what it is. So, I think you may ask are they still around? I would hesitantly say yes but with no new music since 2011’s “Doombound” I can’t be 100% certain. Also, these tracks seem to be released independently of their label (Napalm) which may also lead me to believe they are in hibernation. There are 7 tracks here totaling around 27 minutes and can be acquired thru their Bandcamp page. After sifting thru their discography, I don’t recognize these tracks and can assume at least they have never been previously released. This should be pretty telling as to the quality of the tracks here if they didn’t end up an album at same point. There are a couple of hotter tracks on here (“Alatar-Forgotten Wizards II”, “Elessar’s Call”, “Dwimmerlaik”) which I think are above par compared to the rest. The beginning and end of the collection here are both instrumental oriented (“Feast For The Wanderer” and “The Tale Of The Downfall”) which really don’t help carry the other tracks and I think that is what is the biggest issue here….this sounds like a lot of tracks just thrown together and not a cohesive planned release. For you die hard Battlelore fans out there I’m sure that you would be all over this and it is good to hear something not heard before. This would have worked better if it was in tandem with some new material as a bonus disc or at least with a few added tracks or even some live material but as a standalone release, I really have a hard time justifying it. The sound is somewhat uneven with some tracks sounding more produced than others and that would make sense if they were recorded at different times, different studio, etc. Is it worth getting? Well you can listen on Bandcamp and judge for yourself and as for me, I will wait until a new album come out or keep listening to the old classic stuff.