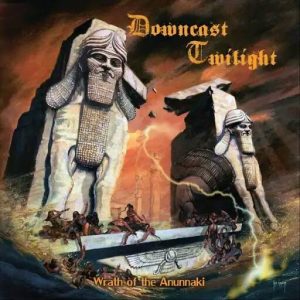 In their second album and after 2 years, Downcast Twilight brings us a work a little further away from the style of the first album, leaving aside the folk-metal style to focus more on deeper sounds and more darker riffs leaned to melodic-death metal and without Shannon Lee Stott-Rigsbee at the violin.
The release starts with identifiable Middle Eastern style melodies to give this album the feeling they want to project as a conceptual disc about Sumerian mythology, which may seem strange for an England band, but understandable when we see that its members are from places so different -in influences of myths and local legends- like Greece, Russia, and Italy. With the addition of some choirs and the aforementioned style, you could assume that they wanted to give their own sound to this album, but maybe some of you -myself included- prefer a little more the sound of their first album; nonetheless, it is an enjoyable job in general.
“Wrath of the Anunnaki” ends with much softer melodies and with the story of the goddess of death in “Ereshkigal’s throne” leaving aside the guitars and metal in which we started, ending with a more dense and mystical atmosphere.
My favorites?. “The Journey of Gilgamesh” and “Elder terrors of the deep”.  But, looking forward to seeing in future songs, if the band will give us a surprise exploring different styles, a more solid definition of the style of this multicultural band or a return to such great sound like the one that was the previous release.
Do not forget people: Make your own opinion. Support the metal scene.

Goblin Hovel
The Comedy of Forms, The Tragedy of Function