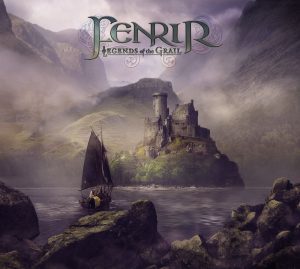 Fenrir is back with a new album. It has taken quite a while since their previous album ‘Echoes of the Wolf’. Their previous album was their debut and I was stunned by that one, back in 2012.
Listening to their new album I wondered why I wasn’t just as enthusiastic as I was 7 years ago. Reading back my review on ‘Echoes of the Wolf’, I noticed my remark on the volume. And again just like apparently did years ago, I didn’t feel the urge to turn op the volume while I gave it a first listen.
After turning up the volume, I noticed once again, their music needs more decibels than you would think at a first. The music felt much better now.
But compared to the first album it’s more restrained. It seems to me the songs are very though-through, but in the process the young enthusiasm got restrained a bit.
This said leaves us a very nice album with quality music. The violins play an important role in the songs, with ‘Brocéliande’ as one of the highlights of this new album. The songs are sung in English and Old French. Where the skills of Elsa where displayed all over the album in their debut, the vocals don’t stand out as much as they did in ‘Echoes…’, they are probably at their best in ‘Morgane’, the whistles in this song are very nice as well. The rest of the band is nice and solid, don’t read this as they are average, but they form the solid foundation on which the vocals and violins create their frivolous artwork.

In potential the songs are just as good or even better then on their debut-album, but in my opinion it’s all a bit to neat and tidy. It lacks a bit of the enthusiasm of their debut. But all in all a nice successor by Fenrir.