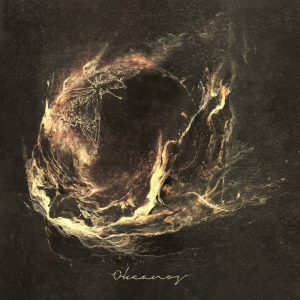 Let’s start by getting the obvious out of the way German, Firtan is not what we would typically think of as Folk Metal, rather pagan black metal with a progressive death twist. However, I am particularly keen on them due to bassist, Oliver Konig’s close affiliation with one of my favorites, Finsterforst as well as their quite universal likability.
Though some line-up instability in recent years has affected Firtan’s throughput, things have settled down a bit and they’ve managed a substantial sophomore full length “Okeanos”. One that plays almost like an EP but is 40 minutes long, averaging an impressive 7 minutes per track. The very first, “Seegang”, upholds a powerful beginning to the album with early dialog followed by anguished screams, finally, beautiful guitars guiding us into the swing of things. Technically, the varied rhythm and melodies exhibit ingenuity and a solid foundation, riddled with bridges that add a sense of wonder and hope in an otherwise somber theme. “Tag verweil” enters with a serious riff onslaught layered on them juicy blast beats, as Firtan flex their speed muscles. Delighted by the rhythmic pauses, we are thrown into anticipation on this Okeanos journey. There are traces of pleasant clean background male vocals and I also notice clever use of cymbals in the chorus. We are led to a beautiful key breakdown and then, a sudden ending. For the third (perhaps single) “Nacht verweil”, Firtan created a bleak yet compelling video with an atmosphere as earie as their sound, gorgeous strings branching the song together. A violin or viola ballad for the fourth feature, “Purpur” next on our agenda, and this one ruthlessly tugs at my nostalgia strings. If the previous track isn’t enough to set the mood, I am ever more strongly reminded of early/mid Opeth intros, riffs and ethereal background keys as we embark upon the second half of the album with “Uferlos”. Between that and the finale “Siebente, letzte Einsamkeit”, Phillip Thienger clearly displays his vocal versatility in sections of ominous wailing stemming from deep harrowing growls. The harmonic chord progression ring compositional depth and make it really hard to pick a favorite on Okeanos, each track its own piece of the album puzzle. Overall, these guys are guitar focused, upholding dense sound quality with multiple, well thought-out components. The interplay between acoustic and distorted guitars makes for a fun listen. Finally, putting everything together as nicely as Firtan has, demonstrates a clear accomplishment and will keep me on the lookout for their future projects.