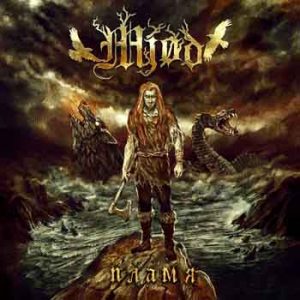 When I hear the name Mjød and new album, there are 2 acts that come to mind and definitely more so the one from Russia and not the one from the U.S. who have been quiet in the last 5 years. Yes, the Mjød from Russia has another release entitled “Пламя” (“Flame”) out as of November on the always epic Soundage. They have been a busy bunch since their inception n 2016….. numerous single releases, an EP and now their 2nd full length. The new album has 11 tracks totaling 44 minutes including two singles released prior to the album…title track “Flame” and “Sleep Of Amulets” featuring members of the epic Khren (formerly Eldiarn) and the woefully underrated Drygva. In my last review of their debut album (“The Ash Of Times”) I was totally blown away by how much they had changed for the better in a short amount of time. Now with another album out so soon, I would say they have plateaued out a bit but not to any detriment….rather to a landing into their sound. While “The Ash….” may have been more entrenched in death metal of the Viking variety, Mjød have tried some new things to vary their sound from the mass hordes. First, I think they are a little more thrashy this time around and have done a better job of incorporating the folk instrumentation and changing vocal styles. I think some the acts I compared them to before (Grimner, Varang Nord) are still pretty valid along with maybe some Amon Amarth of course and the epic Wartha (now Vojstrau). I think the heaviness along with folky woodwinds hasn’t really been explored as much as it could be and Mjød are certainly pursuing this. Ranðgrið primarily plays bagpipe but also does some whistles and others for sure and there is a good amount in the tracks here. There is a lot more clean vocals over the harsh ones this time around as well and that helps make the tracks more interesting. The songs are solid with my only gripe being that sometimes the tempos don’t really match or feel cohesive to the rest of the track…..not that there is a performance issue but rather the patterns and style don’t work for me in relation to the rest of the music. Overall another decent album and a huge improvement sound wise for sure…..much heavier, clearer and in your face than the previous efforts although the folk instruments floated too far out on front on occasion. An enjoyable listen and I’m sure they have a lot more coming out soon…. probably another album coming out any time now (yes that’s a joke but I’m probably not too far off….)