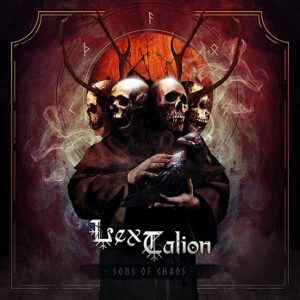 Nice to notice that folk metal is still made all around the world. Last year Argentinean Lex Talion released an EP, now followed by the band’s second full album. Typical is the use of clean as well as harsh growling vocals. Mostly leaning towards Viking metal, Lex Talion finds it’s own niche in the scene.

Let’s start with the bad news. The first two songs don’t get the album going. At all. The midtempo songs don’t grab your attention. As a first time listener I would have stopped listening right there. But having promised to review the album, I soldier on. After a very short intro, which has its own name, finally ‘Sons of Chaos’ wakes us up. Not much faster, but very much louder. Indeed, rather impressive grunts, pouncing drums and vivacious riffing. Now we are talking. Between the growling there is some clean singing, which is way less convincing. A strange combination. In this song it works okay.

Forwards with ‘Arise’. Pretty Viking-y, let’s go to battle. More clean singing, alas on the verge of out of tune. When the lyrics change to Lalala the song becomes too simple to enjoy. I wouldn’t be surprised if it works during a gig though. Second highlight is ‘Nightwing’. Good variations vocal wise. The clean singing reminding somewhat of the bombast of Wuthering Heights, but hardly with the same quality. Great rhythms, great song.

The rest of the album is varied enough. A heavy metal song (The Circle), an acoustic one for near the campfire (Thunders over The Fields) and two more Viking songs. With these the albums ends on a high note. Still mostly midtempo ‘King of Death’ and ‘The Great Divide’ are dark and beautiful. Pretty riffing and soloing guitar parts.

But wait a minute. Two out of four good songs were released only a year ago on the EP. And this album only lasts for 38 minutes. So all in all less than half an hour of truly new music. In which we find only two really good  songs. That is not enough. And we have to take into account that production isn’t fantastic throughout the album. The vocals are taking the spotlight all the time. Keyboards sometimes drown the metal elements. Enough room for improvement. Next album must show that or I can’t see a huge future for the band.