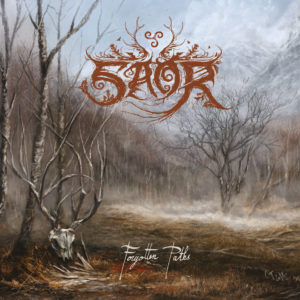 There have been many reviews in the past in which I’ve highlighted everything that can go wrong with the Black Metal genre, especially Atmospheric Black Metal. I feel the need to clarify again that I have nothing against Black Metal and that some of my favorite Folk Metal bands have their roots in Black Metal. However, I maintain there are so many pitfalls in writing a Black Metal song, from ceaseless riff repetition and monotonous percussion to the elements at the opposite end of the spectrum in absurd chord progressions and pretentious keyboard ambience. I say all this, but I have heard all these achilles tendons of the genre somehow being present without making songs themselves bad, which happens again on Saor’s latest effort, Forgotten Paths.

Overall, the album has the same hauntingly ethereal feel that is so common in Atmospheric Black Metal releases, but as per usual for Saor’s work, the effect is accomplished using folk instruments in lieu of the keyboards typically used by other bands in the genre.

While the atmosphere is far away from the purely Celtic feel of previous releases like Guardians, for example, the whistles and pipes maintain Saor’s roots. Another exemplary aspect of Forgotten Paths is the instrumental, “Exile”. It runs at four minutes long, a reasonable length considering its quality. While it isn’t a bad song, “Exile” is really just an okay piano solo at its core and is overshadowed by the standards of the other tracks. Luckily, Saor has become one of the atmospheric black metal bands to realize that an instrumental should not run 12 minutes if it doesn’t have enough substance to run that long, unlike some other bands who still act as if their respective filler tracks are comparable to Beethoven’s ninth.

While I do have mixed feelings about the vocals let me first mention the positive about them. They are undeniably true Black Metal vocals, with all the raw, wraithlike screeching one would expect from the genre without taking cues from the growls of Death Metal and all its derivatives. With respect to the technique, I have nothing but respect for Andy Marshall’s performance. My main complaint is that the vocals are so harsh that I couldn’t discern the lyrics without looking them up, which may be a minor problem, but I feel that not being able to hear the words ruins the extra layer of immersion a bit.

Taken as the sum of its parts, Forgotten Paths is one of those Black Metal releases that dances along the precipice of failure but never slips, and is a release that should not be missed by fans of Saor and fans of Blackened Folk Metal alike.