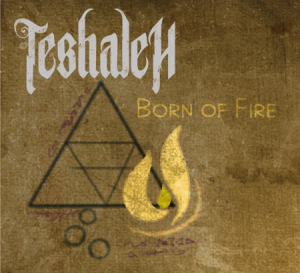 Is there a folk metal capital in the US? If not, I’m sure I would nominate Baltimore, Maryland. Home to the epic Sekengard and Isenmor as well as the Maryland Folk Metal Festival, there is definitely a scene in the Clipper City. Another act soon to be in the same breath is Teshaleh with their debut EP “Born Of Fire” set to be released February 1st via their Bandcamp page. The EP features 5 tracks totaling approximately 20 minutes and for a band that has had a relatively short existence (2017), the tracks here are polished and catchy and sound much more like a seasoned act years down the line. A big reason is that most of the members are in established acts in Baltimore and the surrounding areas and have put their time in. So, is there a “Baltimore” sound to Teshaleh? I think that there could be a slight connection to the other acts, but I think they have a unique sound, primarily based in Middle Eastern, Indian and Renaissance era music I would say. While I wouldn’t say that is exclusively their sound, it does resonate within most of the tracks here. Right from the first track “Ancient Brotherhood” you will hear the layers of vocals, instrumentation and riffs with images of shifting sands and far away lands flashing in your mind. There is a lot of players here (8) so thankfully they have shown reserve in not going over the top with the arrangements and playing. Two acts I was reminded of while listening is semi-obviously the epic Orphaned Land and even our debut album of the year 2017 friends in the equally epic Apocalypse Orchestra and not bad company to be associated with at all. There are two primarily vocalists in Vanessa Harris and Lori Glimmer and they trade off as either primary, backing or harmonizing from track to track. In the folk instrument department, John Harford handles woodwind duties including whistles, bagpipes and shawm while Colin Parker handles violin. The rest of the band is rounded out by guitarist Brett McCoy, bassist Chris Welborn, drummer Dan Wise and keyboardist Damien McCoy. There are two tracks here which I think are maybe more anthemic (“In Taberna” and “Nowhere Near Enough”) and straightforward while the remaining two tracks along with opener “Ancient Brotherhood” (title track “Born Of Fire” and “Totentanz”) are more fantasy/sorcery sounding but both “categories” of the tracks are still killer. While I have thoroughly enjoyed repeated listens, my feeling is they have even more to offer on future releases as I am sure they have only scratched the surface of what they can do. Case in point? Despite the sound quality, they do a cover of “Wooden Pints” on YouTube and I had hoped they would have recorded and added onto this release…..wishful thinking on next release. I am a fan of the overall sound of the EP even if it is a little flat or hollow in a spot here or there but for the most part, decent for an independent release. EP of the year? Not a category we do, but debut of the year, “Born Of Fire” could be one. A great way to start off 2019 as the harbinger of another killer year in folk metal music.