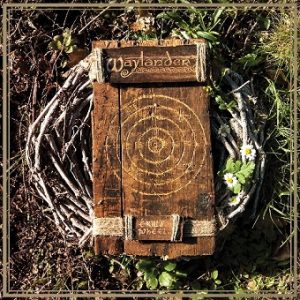 An agonising 7 years have passed since Waylander’s last album, “Kindred Spirits”, was released and the wait for new material is finally over. That said, Waylander have never been the most prolific of bands, having released only 5 albums, including this one, in their 25 year plus career, but of course quality is more important than quantity. Existing fans of the band may well be taken a back at first as “Eriu’s Wheel” lacks the immediacy of the earlier albums and the traditional folk melodies of old have been noticeably stripped back and in their place is a darker, heavier sound akin to that of Primordial or latter-day Cruachan. There is no need to fear, however, as it gets better with each subsequent listen and rewards the patient listener with a beautifully crafted piece of work which I can honestly say could possibly be the best album Waylander have put their name to.
“Eriu’s Wheel” is something of a Celtic Folk Metal concept album, telling the story of the passing of the seasons and of the wheel of time. Proceedings start with the gentle, soothing sound of a crackling fire and a spoken word intro, complete with soft atmospheric pipes and acoustic strings, before the first track proper, “As Samhain Comes” sets the tone to come with its thundering drums and breakneck riffing. After a couple of listens, initial stand-out tracks for me are “Shortest Day, Longest Night”, “As The Sun Stands Still” and “Beltine”, but each song is perfectly arranged to immerse you in the story being told and as soon as the album ends you will want to listen to it again and again. Waylander are back and sounding as good as ever, if not better. A Folk Metal classic!