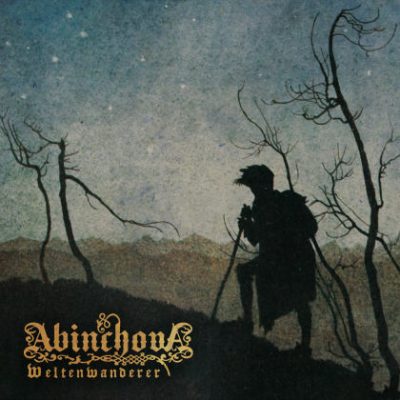 Where do I start? Initially, I was super excited to review this album seeing as how the first listen left me optimistic for a newly yet to be discovered band. Based out of Switzerland, Abinchova released Weltenwandered as their third full length attempt in late 2018 and my feelings on this album are mixed, as is my impression of the band overall. As a diligent folk-metal reviewer and researcher, I made certain to listen to the two previous efforts from this 7-piece act which only further confirmed my confusion.

The tracks are generically catchy with traces of folkish violin and keyboards throughout. So what if intros are overdone, there remains something to be said about “setting the mood;” a trait Abinchova has stayed true to since conception. Glimmers of hope for uniqueness shine through in tracks like Eulenmann and Gewasserdieb where the violin playing sister Nora contributes a nostalgic essence in the strings as well as vocals partnering Arnaud’s harshness. Who I would qualify as a straightforward mid to higher range death growler with an almost a hardcore feel to the tenor. We are also graced by ethereal background keyboards sprinkled in by Patricia. Those three components round out the original members of this band as we know them now, maybe with bassist Wigi tagging along. Throughout the album, I kept hoping to hear more from the ladies because as they are sometimes shrouded on some tracks. I don’t believe this is woefully these member’s faults or production quality but rather a lack of ingenuity from the newest additions. The down-tuned rhythm is honestly a bummer on tracks like Sennenpuppe and parts of Lichtfanger. Yah, there’s some finger picking on the lead but jeez, I’ve definitely heard that before. Listening back to the previous two albums Wegweiser and Versteckte Pfade, it is apparent this has not always been the case. True folk metal themes appear to have left the band with the original rhythmic portions and if you’re expecting high pace classics like “Pestfiner”, you won’t find them on Weltenwanderer. In fact, it seems like each new album takes Arbinchova further and further away from the original feel. The course they’re currently on is one of already composed riffs, licks and solos with little discerning them from other “metal” acts. Not being completely negative, the album in general is all fine and well, just fine…I’m fine, you’re fine, we’re all just fine. Fine. Evidenced by how lead guitars and bass in most tracks mimic the violin, same notes octaves apart lacking the original speed that to me, gave these guys an edge.

On the upside, what the album is, however, is easy listening. Not to mention clean vocals are incredibly tasteful and well-done, with an almost angelic like aspect. There are many qualities I appreciate here but am left searching for folk/Viking themes that were prevalent before. I also believe this album would receive mixed reviews across the board, not just from me. Despite the great efforts by melodic pieces, it lacks innovation complemented by backing rhythms. I dunno, decide for yourself perhaps.