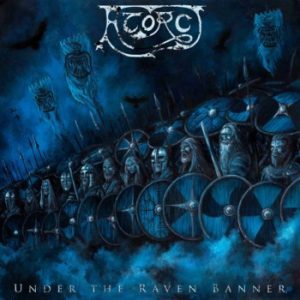 While there are definitely many bands who don’t always get the exposure they deserve I still maintain that in the case of East Anglia’s Atorc, this is especially the case. Their previous effort, Seven Songs of Swords & Ale, was arguably an example of covering all the primary themes of European Folk Metal but with music that was somewhat more Folkish than many. Personally, I’ve always thought of them as playing Heavy Metal influenced Folk Rock with a Micheal Kiske-esque vocalist. Even their lyrics, while dark, were presented so melodically and upbeat that it never really sank in, but their music always had a certain charm for me. Despite this, I never expected what their latest album had in store.

Under the Raven Banner is actually fairly easy to imagine in concept. Picture Hellbard’s most ambitious singing, the sombre folk melodies from “The Tavern Song” off their previous release, add in the drumming and eerie ambience of keyboard driven symphonic black metal and you have a pretty good idea of what Under the Raven Banner sounds like. While there have been Folk Metal bands that have managed to play grimmer sounding music (Finntroll comes to mind) the fact that there are Atorc songs that feature raspy screams is something I’m still processing. Aside from a score of new influences, they still play the same type of merry Folk they usually do throughout their album, but their darker songs are still striking when they pop up.

Even though the group’s foray into extreme Metal vocals has some room for improvement and the album comes across as somewhat poppy for all its enhanced abrasion, there is nonetheless something hopeful about Under the Raven Banner. After all, if a band as heavy on the Folk aspect of Folk Metal as Atorc somehow manages to produce something ambitious enough that the motto on their Raven banner might as well be Edgar Allan Poe’s similarly titled poem they must be doing something right.