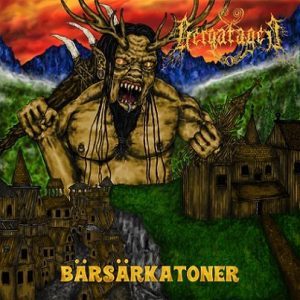 There are always one or two albums every year that make me gasp when I hear it the first time and Bergatagen got me with their seemingly debut album “Bärsärkatoner” (don’t ask me for translations as I couldn’t find any and I don’t really care anyways) So who are these guys? No idea……other than it is 3 members playing guitar, bass, drums, vocals and a host of various other things going on. First check out the album cover and it’s old school vibe of a troll about to decimate a quaint village…..sweet. The cover is a nice set up to the contents which is 32 minutes and 8 tracks of skull smashing troll black metal with some twists along the way….adding symphonic and folk instruments at each quirky turn. Description wise I thought of this quagmire…..Venom, Finntroll and Mysticum jamming on mushroom laced versions of old Mayhem, Kreator and Dimmu tracks……I’m ready for more. While the speed is there, the catchy and gritty lack of production is either a happy accident or super brilliant….the distortion and overall sound is like my old 4 track was used to record this and it’s probably rotting in a landfill somewhere. Barely discernable vocals are sprinkled in the middle of a whirlwind of riff after relentless riff which vary in style from black, thrash, power….you name it, it’s in here. The best part (amongst too many) is the use of the keys and folk instrumentation and tempo changes…..they really define the tracks from the start. Hailing from Sweden, the lyrics are in Swedish (presumption on my part) and my browser quickly translated a couple….”Christian Meat And Mead”, “Adorned With Horns And Stench”, “In Stone Pits, Black Blood Is Raised”…..I mean c’mon this can’t be real can it? It certainly is and I guarantee I am under selling this one big time. There is a short opening instrumental (“Där Solens Strålar Ej Kan Banna Oss”) and the super closer 6 minute “Kyrkklockorna Klämtar Aldrig Mer” with the other six tracks averaging about 4 minutes. Did I mention the band members? Bassist Blodsagg, Guitarist/Keyboardist Huggsint and Vocalist/Drummer Svartgrimme are the three ghouls behind this masterpiece and are giving troll metal the good kick it needs back into life. Tons of blast beats and just strangeness from beginning to end. This might be a little extreme for most but if you’ve plateaued out at Trollfest or Svartby, this would be the next logical step I would think. Guess what? If you don’t dig it, that’s OK cuz I will listen to this album probably a 1000 times this year…..and I already have it sitting atop the throne on my debut of the year mountain right now until someone knocks it down…..good luck. Great album.