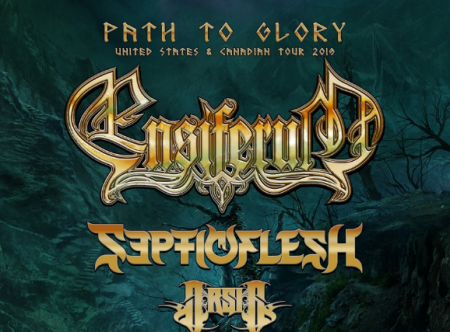 To be honest, I recently kinda fell out of love with Ensiferum. Perhaps to my detriment, because Two Paths just screams OG Ensiferum in many aspects once you really listen to it. The albums prior, which I shall not mention, left more to be desired. Naturally, I had no choice but to take the opportunity to catch them on their journeys through the US and my neighborhood in particular. Now, I’ve been to Oakland Metro before, I’ve also seen Ensiferum more than once before; the aftertaste this venue leaves behind is unfortunately a detriment to the amazing acts, quality of sound and overall environment it delivers. It’s really too bad; the Bay needs better representation IMHO. Despite setbacks that I will detail later, the Path to Glory show was friggin’ awesome!

Catapulting the start of this great show, Arsis was technical, heavy and harsh and really quite impressive with their aura, reminding me of Crionics and times passed but perhaps a little much for the crowd. Hovering somewhere in the Black and Death Metal genres, these guys put on a fantastic opening act that did not reflect the clearly iron and leather clad fans in their full Viking gear, gearing us early arrivals up even more for the main attraction. Septic Flesh is and always has been a class act, and they projected a very powerful demeanor. Meanwhile, the restrooms began to flood in the back, starting with the males’, quickly spreading to the entire septic system. At this point, most show goers began to panic, myself included, for fucks’ sake. Luckily some facilities were available within the neighborhood and the show carried on. Septic Flesh presented a clean production much admired by the crowd, in no way echoed by the lack of functioning plumbing. With all the commotion and full bladders abound, their set seemed short. I didn’t terribly mind, because it was time for Ensiferum!

I cannot overexaggerate how well put together the main act was, starting with Two Path’s singles and of course, integrating crowd pleasing favorites like Twilight Tavern, Lai Lai Hei, Guardians of Fate, I think, Magic Potion and many more. I had so much fun, I legitimately forgot which ones.

Ensiferum themselves claim this show to be in their top ten, and I am damn proud of the fact! I love the bay even though its’ metal representation is thin, we are diverse and lucky enough to attract the best, of which, Ensiferum are not done yet with their worldwide heathen takeover. Back in love and forever fighting for metal!!!