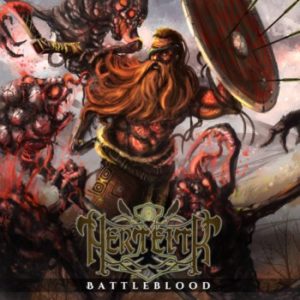 Despite having been doing the rounds since 2008, this EP is the first official release from Colombia’s Herteitr and while the production might well be lo-fi, the standard of the songs themselves is very high indeed. The band’s style is quite Northern European in sound and while there are similarities to such scene luminaries as Svartsot, Eluvietie and even the mighty Amon Amarth, there is enough of their own personality on display here to make Herteitr stand out from the crowd.

This is one of the best folk metal releases I’ve heard in some time, but at just 4 songs / 18 minutes in length, my only complaint would be that it is all over too quickly.​ On the other hand, this just left me hungry to hear more from this promising band of heathens. Definitely one to add to the ‘to watch’ list, Herteitr could be future shining stars in the genre if they keep producing material as good as this and, of course, if they can try not to wait another 10 years before putting out a full-length album.

It’s impossible to choose a stand-out song as they are all so good, but if I was pushed, I’d say give “By Death Comes Glory” a listen first, but honestly just do yourself a favour (and support the band) by buying a copy of this fantastic EP.