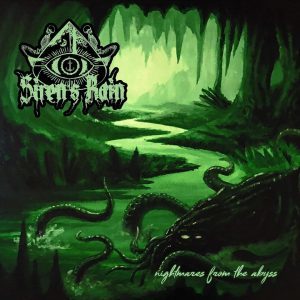 I would like to think I am pretty familiar with most folk metal bands here in the US but every now and again one springs up that I hadn’t come across. Considering that they are on the other side of the country (the Pacific Northwest to be exact), Siren’s Rain are now in the conversation. Formed in 2014, this unit has released a previous EP in 2016 (“Beneath The Narrows”) and are now issuing a follow up EP entitled “Nightmares From The Abyss”. Featuring 5 tracks (6 if you count the regular and single version of the track “Nightmare”) totaling about 25 minutes of tuneage. Before I started into the new one, I listened to the debut EP and liked what I heard …and was surprised by how much they have in common with what I like to call “The Baltimore Sound” which acts like Sekengard, Isenmor and definitely most closely Teshaleh have been growing over the last few years. I would say there is a dirge and more symphonic edge and world music to their overall sound. With it looks to be 8 members now, Siren’s Rain I think is still forging their sound and with this many players, that certainly makes sense. From a folk instrument perspective, you will get some flute, fiddle, hurdy gurdy and keys along with the guitar, bass and drums so a lot potentially going on. Vocally, there is the primary female vocals and brooding, heavier backing vocals that take the forefront on occasion. I was hoping for something a little more up tempo at least in one track but most tracks are pretty mid paced.  Is this good or bad? Well ordinarily I like some diversity with this style and I think a little faster a track would serve them well. From a song writing perspective, the tracks are pretty straightforward and easy to grasp……that’s a good sign and makes them easy to remember. I would say that my overall feeling that while this is enjoyable is that it is pretty “safe” and doesn’t really push the envelope where it could. Highlights for me are definitely “Nightmare” which I have been humming all week and “13 Steps To Hell” which is the heaviest and darkest track here. Sound quality is on par with maybe a little too much folk instrumentation up in the mix but for an independent release it is certainly above what you would normally get. For a 2nd EP this is definitely a step in the right direction with a lot of moving parts and tons of possibilities. Siren’s Rain have put out a solid collection of tracks and have the potential to crush it on a next release…..decent EP.