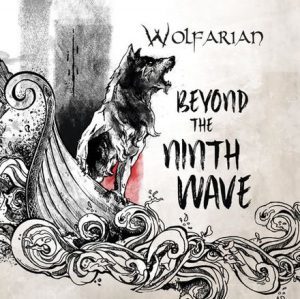 There has been some great music coming from the Czech Republic over the last few years including one of my top albums with Cruadalach’s latest “Raised By Wolves” from 2018. This year coming up we will have a new one from Welicoruss and one that has already arrived in the form of a 2nd album from Wolfarian. Entitled the “Beyond The Ninth Wave”, this is the follow up to “Far Away In The North” from 2015. Featuring 9 tracks and totaling about 40 minutes, the album is still an independent release for this troupe of I believe 8 members from Brno. I tend to think of slightly heavier acts from the Czech Republic so it is nice to hear something folkier and symphonic for a change. From a configuration perspective, they have both male and female vocalists who trade off or fly solo depending on the songs. Folk metal instrumentation consists of flute and violin with augmenting keys along with the backbone of guitar, bass and drums. Definitely not as cacophonous as one might think, and tracks are pretty simple and catchy for the most part. Acts I was reminded of were Winterhymn, Grai, Brezno and Zaria with a blend of symphonic and folk. While I think overall the album is decent, I think there are two factors that hurt it. First, I think the overall sound of the album is somewhat flat and hollow and doesn’t deliver the punch that I think it could have. It could have much more impact if the whole album had a little more bite. Secondly and more importantly, the tracks are pretty safe from a style and performance perspective and aren’t really anything you haven’t heard before. Yes, they are good and solid but not setting them apart from anyone else. Need an example or two? How about the latest albums from Trollwar or Sojourner as comparisons? Symphonic folk with tons of energy and interesting tracks and made for repeated listens. The most successful tracks on here I feel are towards the end especially closing track the 8 minute “Farewell” where they put together a nice blend of tempos, riffs, vocal changes and styles…..this is the highlight for me. Wolfarian have all of the parts to be huge and I think a few more chances and a better mix/production will definitely propel them to the next level…..decent album and a promising future ahead.