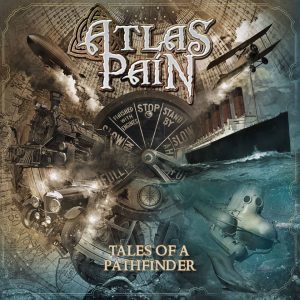 As an amateur writer, this marks my first ever exclusive pre-release, listen and review; moving up in the world folks… So where do I start? Atlas Pain is a novice quartet out of Italy with a self-proclaimed Epic-Folk metal global sail (at least, that’s what the lyrics tell me) being their second effort here with Tales of a Pathfinder. This full length offers a whole 49 minutes of 10 tracks, intros, outros and midtros included. If you’ve registered “Epic-folk” metal, you may be quickly averting your focus to other Euro acts like Equilibrium or Dalriada and you wouldn’t be too far off, Atlas Pain certainly make a noticeable effort. However, I would say there is growth to be had despite the ambitious delivery.

Okay, okay there are hymns aplenty, lots of melodies and speed, so seemingly all the correct ingredients, though I sometimes lack to see the complete gourmet end result. Atlas Pain is plenty melodic but not always catchy wherein a few tracks might lack vision and cohesiveness throughout, yet others warrant many enjoyable repeat listens. I swear I’ve heard a couple riffs in ‘The Moving Empire’ and ‘Hagakure’s Way’ before, so much so I forget them every listen; maybe ‘Odaudlegur’ should have been the album opener even if it is plagued by the same routine. Most of the lyrics are in English growled in a classic black metal style, accompanied by clean male chants. I am ever perplexed on my feelings regarding these guys looking over the album cover depicting a blimp, a single engine plane, vintage car, train, submarine, a ship resembling the Titanic, and finally a compass. So, you see, lots going on. Complementing this confusion, the appearance of the band is one of Steam Punk and further investigation reveals a cultural and thematic mashup bordering on a perceived appropriated journey through the lands (cue the Russian military hats, Native American head garb and spoken anecdotes)

As far as the epic theme is concerned though, only a couple songs truly pull on the heartstrings; the single Kia Khan, Shahrazad and Homeland (redeemable, massively impressive musical stories) proving the slower developed numbers seem to latch on more whereas the upbeat tracks, are ostensibly more generic. Be on the lookout for electronic components in The Great Run for good (confused?) measure.

Overall, Tales is a notably worthy album, much less a big improvement from the debut so the band appears to be on the uptick. There are tons of great elements here yet a slightly disjointed theme. Atlas Pain stick to a rather rudimentary formula with this sophomore debut from which I hope a unique message will eventually evolve. Interesting to see how they would perform live, does one guitarist double as keyboardist?? a crucial aspect of their epicness, among the strings and chorus. With some refinement and a focused vision these young bucks could really kill it in the coming years and I will be right there, cheering them right along.