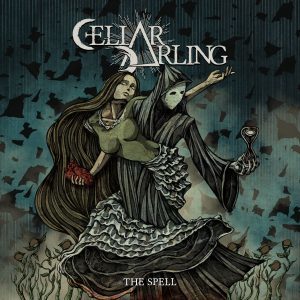 Cellar Darlings new cd The Spell is a pleasure for me to review. I have been a fan of Anna Murphy from her time with Eluveitie and of course I was saddened by the band split that occurred. I have been pleasantly surprised by the output of both bands since. Eluveitie is just as powerful and mysterious as it ever was and Cellar Darling has taken a different path while staying centered on Anna’s vocals and fantastic folksy melodies.

“The Spell “takes a more progressive path than” This is The Sound”. The former album was I think more folk based and presented a band that was finding its sound. On The Spell the band seems to have found that sound and it is grand and complex. On my first time through I thought the music was quite progressive and doomy with a melodeath vibe as well. Anna’s vocals of course stand out and tasteful guitar, Hurdy gurdy , piano and flute fill in the gaps. This is an album that I would say really takes root on repeated listens. It is so layered and full of surprises that you cant take it all in on one listen. The concept is based on death and the maiden and the story is inspired and works incredibly well with the music. At times dark and moody with a doom edge that reminds me of Apocalypse Orchestra and other times uplifting with a heavy progressive feel Anna’s vocals rise above everything and shine brightly throughout. Guitars, drum and bass are absolutely brilliant and mixed well and the hurdy gurdy, piano and Anna’s flute are well placed and highlights in every song. There is also artwork available on Cellar Darlings website for every song and according to the band there will be animated videos using this concept art for every song as well so there are many ways to enjoy this album and it seems to have been well thought out and executed for maximum exposure. Also the band are really incredible live. There is a you tube studio video available of them performing new songs live in an intimate setting and its wonderful. Check it out if you enjoy this band.

After many listens it is difficult to pick favorite tracks since the album works best as one long beautiful story but forced to pick favorites I love the opening track” Pain”, “Love”,The beautiful “Sleep”, “Insomnia” And the closing tandem of Love and Death part 2. I’m sure that there will be people who wont like the direction of the music on this album and will wish for something closer to Eluveitie part 2 but I’m really impressed by Cellar darling and this album is a wonderful, exciting and deep listen. For those who love progressive music with a folk edge and a great dark story check this out its inspired and multi- layered.