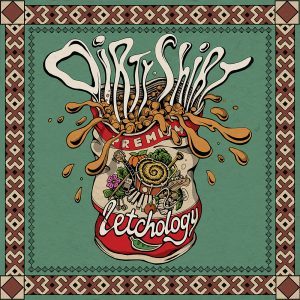 After a very dirtylisious album ‘FolkCore – DeTour’ Dirty Shirt is upto a new album again. The band sticks to their sound, Core, Folk, Punk, Metal once again all over the place, but again the band is on top of it everywhere.
Of course this time there band does it all themselves, unlike they did on the registration of their magnificent tour on their last album. This makes it sometimes a bit less folky.

Letchology starts of with ‘Latcho Drom’ a song where you can hear the traditional Romanian, kind of Gypsy, sound. The same influences can be heard in the next song ‘Pălinca’ as well, but here the punky core sounds comes in.
This core sound seems to dominate in ‘Put it on’, but then the band mixes some ska into their sound, to slide seamless into the core sound again. Still with me, no? I can’t blame you. It’s hard to keep track of the band once they break loose. But it’s a nice sound, and that’s the only thing that matters.
And just when you start to get used to the fact their music goes in all direction, even within the songs and you think this is quite nice, the song ‘Hora Lentă’ starts. The intro of this song is great, I really, really love this sound and I think it’s a pity the rest of the track doesn’t have more of this atmosphere.

When you like a mix of styles, you’re absolutely at the right place with Dirty Shirt. The band owns this style, but personally I liked the bit more folky sound of their previous album better. But still, this is very nice album.