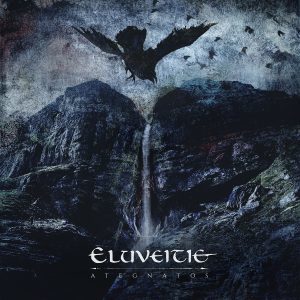 With Ategnatos, their first “proper” album since 2014’s Origins, Swiss Celtic Folk Metallers, Eluveitie underscore once again why they are one of the best bands in the Folk Metal scene today. It retains enough of the instantly recognizable sound of earlier releases to please existing fans, while at the same time pushing forward into previously unexplored musical territory which opens up all new possibilities for the band. Already one of the more popular bands in the genre, Ategnatos could (and should) be the album which sees them take the step up to, at the very least, the outer edges of the “mainstream” metal scene.

A couple of things instantly stand out on Ategnatos: First and foremost are the sublime vocals from new clean vocalist/Celtic harp player, Fabienne Erni. I knew she was going to shine after seeing her upstage the rest of the band with her live performance in 2017 and her powerful voice lends the songs an almost Gothic Metal air akin to the likes of Nightwish or Within Temptation. Second is the unexpected, but welcome appearance of some old-school trad metal riffing, such as on Rebirth.​ Overall, Ategnatos is the sound of a band broadening its horizons and there are times where a more extreme side of the band rears its head, notably on Threefold Death, Worship, and the aptly named, Mine is the Fury. On the flipside of the sonic coin, you have the likes of Breathe – which is this album’s answer to Call of the Mountains – and the brilliant Ambiramus. This mix of the beautiful and the brutal can make for a challenging listen at first, but is rewarding after a few listens.

For the sake of a balanced review, if I were to find something negative to say, it would be that the band has a tendency to overuse spoken word parts in intros and occasionally during songs. This has been an aspect of Eluveitie’s sound that has been grating on me for a while now as I feel that rather than adding a sense of drama, it is actually detrimental to the flow of the album, but that is just a personal taste thing I suppose. Not a perfect album, but pretty damn close and a worthy addition to the Eluveitie Canon.