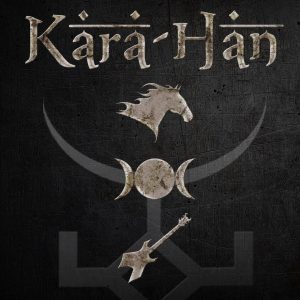 One of the albums I was looking forward to the most this year was the first full album by Turkish trio Kara Han. Their EP blew me away in 2018. Fantastic melodies, oriental influences, a very own sound within the boundaries of folk metal. I was sure Kara Han was going to be one of my new favourite bands for decades to come. Having seen my rating you may guess somewhere something went wrong.

After an okay instrumental intro of a minute and a half Gökyüzünün Çocukları starts rather promising. A nice rhythm, more and more instruments joining the party. This should be fun. And then after a while, the energy level drops. In fact it drops to the level of finding it hard to concentrate on the song. And alas, from here on, there is not too much to enjoy on the album. Everything that made the EP great is lacking on the album. The oriental influences are hardly noticeable anymore. The album is less heavy, bordering on hard rock rather than metal here and there. The (clean) vocals are extremely upfront in the mix. Must I go on? Yes, I must. The two biggest flaws are the at best average guitar riffs and melodies and the aforementioned low energy level. The song structures are not bad, but not very interesting either.

Wait a minute. Second to last song Turan Taktiği brings back a little bit of the magic. Just over two minutes long, this instrumental shows the strength of the band. Melodies and rhythms grab you instantly. Simple, but nice stereo effect. Amazing how many ideas find their way into such a short song. All the more disappointing to hear last song Ozanın Son Türküsü, with 5:37 the longest song of the album. After an acoustic start electric guitars are introduced. Again, the song borders on being boring. Not a way you would like an album to end.

Needless to emphasize I was expecting a lot more of this album. Maybe without the EP in 2018, I would have liked the album better. But, in all honesty, I probably wouldn’t. Could it be that all the good ideas went into the EP? I hope not, because I would love to hear more of the craftmanship shown there. Come on, guys. You can do better than this. In fact, I am going to listen to Hicaz Mandıra from the EP a few times, to ensure the capability is there. … I am back. Yes it’s there. So, no panic yet, but please find your strength back fast.