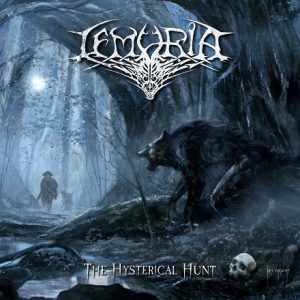 2019 may be known as a year with band reforming after long periods of inactivity….case in point the recent Pagan Reign album after 12 years and now the 3rd full length from Belgium’s Lemuria. Entitled “The Hysterical Hunt”, the album is their first after 9 years with the last being “Chanson De La Croisade” from 2010. Featuring 12 tracks and over an hour of tunes, “The Hysterical Hunt” is out on Massacre records, home to a multitude of killer acts. The band has 2 members returning from the first era in bassist Bart De Prins and drummer/keyboardist Vincent Pichal with new guitarists Gaël Sortino and Jeroen De Kooning along with vocalist Daan Swimmen coming on board to complete the lineup. Frankly I was a little surprised we received their album for review as I don’t really think of them as folk metal but more along the lines of symphonic black metal with maybe a little folk metal folded in. I was definitely curious though to see/hear how the new lineup compares to the old and what better way than to dive right in with the most dreaded of musical endeavors….the concept album. They have been successful at it already (“Chanson….” was about the Crusades) so familiar waters. The new album is adorned with yet another Kris Verwimp masterpiece of a cover and is indicative of the storyline…werewolves. I would say the transition to the new members is seamless as I wouldn’t be able to tell you of any major differences in quality or style……good as always. If not compared to previously, I think Cradle Of Filth is where I would start with them in having a gothic black metal sympho vibe with some Dimmu Borgir as another close comparative act. Where the album is successful is painting the picture of a concept album…..lots of musical passages, spoken word parts, sound effects….the mood is definitely created. Where it falls a little short for me is in for lack of anything new that I haven’t heard before or simply put I guess originality. The album is a fun listen (and not really a folk metal album in my opinion) and does have some good parts, solid playing and definitely the fortitude was there in fulfilling the concept. It just didn’t grab me like other classic concept albums or push into the extremes to make me try to figure out what I was hearing….it’s pretty easy to absorb. Sound quality is decent but does have a semi-noticeable separation of instrumentation, vocals and the other audible parts giving it a detached feel at points. Again, a good comeback album and one I think has something to offer for you more into the gothic/sympho stuff with a touch of folk at times……