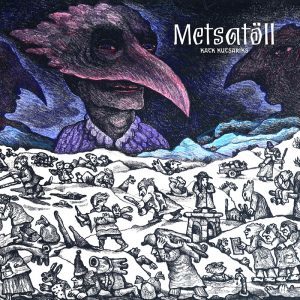 The first thing to get your attention with any new Metsatöll release is the stunning and distinctive artwork and Katk Kutsariks (apparently Estonian for Plague Coachman) doesn’t disappoint with its oddly compelling and creepy cover.

Metsatöll are not your “average” Folk Metal band, if there is such a thing. Indeed, they are actual rather unique as far as their sound goes and it’s actually quite hard to describe their music, but as this is a review, the very least I can do is try. A good place to start for the uninitiated would be with some similar artists and to my ears comparisons can be made to Skyforger, Skálmöld and even Týr. The vocals might be a little challenging for some listeners as they are a bit of an acquired taste, but as with the aforementioned Skálmöld, I find that they go well with this type of music and are something that you become quickly accustomed to.

In typical Metsatöll style, the majority of the tracks on Katk Kutsariks are bass-led, mid-paced stompers with authentic Estonian folk instrumentation which is used to compliment, rather than to dominate the songs. The album opens with a choral-style male voice acapella intro (à la Skyforger) before the title track comes in with its thundering bass / drum combo and beautiful folky mid-section which to my ears is reminiscent of Finnish Folk masters, Nest. The rest of the album continues in this vein until a curveball is thrown in the form of Metsaviha 4, which starts off with a gentle folk melody before segueing into what I can only describe as a tribal chant over a backing drum, which becomes increasingly frantic, before ending abruptly and leading into Metsaviha 5 which is my personal favourite song on the album.

It would be fair to say that Katk Kutsariks is something of a grower, which requires multiple listens for everything to sink in. As I am writing this, I am currently on my fourth listen and it is only now that the songs are really starting to come to life. So far the standout songs for me are Kange Kui Raud, Kurjajuur, Koduhiite Kaitsel and Metsaviha 5, but I fully expect the rest of the songs to open up with repeat plays.