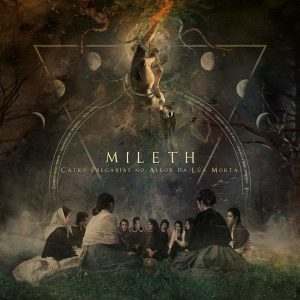 More than 2.500 kilometres between Vigo, Spain and Sopron, Hungary. And yet, listening to Mileth, Dalriada is always there. Clean female vocals, male vocals reaching from deep grunts to high shrieks. Plenty of folk instruments, predominantly violin and bouzouki. Midtempo parts and then pounding double bass. Heavy enough and yet accessible. Not sure whether Dalriada has been a big influence on Mileth, but I am sure that fans of the Hungarian band will also love Mileth.

After 10 years of existence Mileth release their first full album. And we are lucky enough to be witness of a new very mature folk metal band yet again. Clearly the band has made some choices. Along the following lines: we play folk metal, we use folky instruments, we want to have and give a good time, we don’t limit ourselves to what already exists.

Focussing on a few songs then. De Bruma e Salitre gives us some high quality hard rock lines. Keyboards and overall feel shouts Rainbow 1978. There are worse times and bands to be compared with. A quite different song is Ela, Que Camiña Sobre as Raíces do Frío Inferno. Six minutes of instrumental music, growing on you with every spin. Absolute winner though is Do yourself a favour. Listen to this song. Play it loud. No need to listen to it twice. This song has everything the band has on offer. It’s festive, it’s heavy, it contains the entire variety of vocals the band has at its disposal. In spite of easy listening melodies, it’s hardly mainstream, with all the shrieks and grunts. One of the best songs I’ve heard all year!

Last couple of songs are a little bit of a let-down. An interlude of a minute and a half, after which you might expect a last blast of heaviness. Instead the band concludes with an acoustic song. All well and nice when you find yourself deep in the forest with a big open fire, elves and trolls dancing together. In fact the mood the band aims for is probably achieved in total. I just can’t help thinking a more powerful song would leave the listener wanting more.

Let’s end with a positive. That’s not hard. Plenty to like on this album. Play Petros, Axioma da Terra. If you don’t like this song, there are two options. One is that you actually don’t like folk metal. Two is that there is something wrong with your ears, in which case you might want to see a doctor.