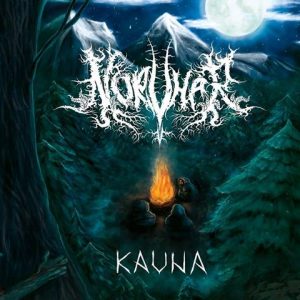 I ran across Norvhar on Bandcamp a while back and was surprised at a little bit of history before even their first release. Originally called Harmoniks, this Swiss outfit has been around for almost 15 years in one form or another and have finally gotten around to putting out an official release. “Kauna” is 7 tracks totaling about 40 minutes and has been independently released via Bandcamp. So, 15 years until a first release? Well a demo or two and some singles until now….looks like there was a period of inactivity before a reformation. Some of those earlier tracks are on here in presumably re-recorded versions (“Fest In Midgard”, “Goblins’ Outpost”) plus 5 additional tracks. I have not been a huge fan of the intro instrumental and I also have to include the spoken word intro as well and unfortunately, “From Fire….” Is the latter but I understand a need to set up the following tracks. Unfortunately, they also opted for an outro spoken word (mostly) track as well with “….To Ashes”. My opinion is both of these could have been left off and given us the meat of the middle 5 tracks for a more powerful impact. There is a pretty broad range of influential acts you could hear here….. Finntroll, Valhalore, Winterhymn, Equilibrium and I think the best comparison in Ensiferum….a nice blend of folky and semi-progressive stuff. There are 6 members (2 guitars, bass, drums, keys and vocals) which is a pretty standard lineup with some flute thrown in for good measure. The tracks have a nice fusion of styles from semi-battle to humppa to traditional to symphonic and they all work in their style. They also shown the ability to go from some 4-minute tracks to 10+ with the epic “Fields Of Fate” which if this is the direction they are heading, the future is certainly bright. There is a nice focused sound to the entire release instead of that muffled type you hear a lot of now these days…..clean, sharp guitar, distinct clean and gruff vocals, singing keyboards and punchy bass and drums. It may be a little too power metal mixed and mastered for some, but I think it really works in livening up the tracks. Despite despising the intro and outro, the 5 main tracks are all strong tracks and well performed and make up for them. Let us hope they don’t wait another 15 for the next release because I’m ready for a new one already. Great release.