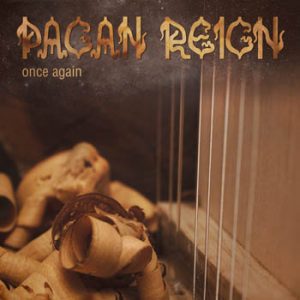 There are some bands out there that for one reason or another do not get the recognition they truly deserve. On a short list I would absolutely put Russia’s Pagan Reign in that discussion. After a very busy stretch from 2002-2006 with 5 full length releases and an EP they decided to call it quits, forming the epic твердь (Tverd). Now some 12 years later, they have returned with a new full length entitled “Once Again” featuring 12 tracks and 54 minutes of music. Before getting into the new album, I went back into the discography again and was reminded of how underrated they are/were. They were one of only a few acts who I thought could really fuse heavier music with folk instrumentation without it sounding forced, plus with a wide variety of instrumentation at that. I would say they could be comparatively to bands as varied as Mithotyn or Vesperia with equal weighting plus a slew of others. The new album does seem like they have picked up where they have left off to an extent, but I think slightly more progressive and less frenzied, although they still have some of those machine gun blast beats. Three members remain from the old days-Oley, Vetrodar and Dimosthen-and they have put together another amazing album. There are tons of folk instruments at play here….actually too many to list but ocarina, mandolin and various recorders are just a few along with various Russian horns and flutes. While Tverd was much more traditionally based, Pagan Reign is much more metal and I think wisely on their part, lyrics are in English for wider appeal. There is tons of folkiness throughout however, so no worries. Vocally, the black/death styles are on display and in various forms….screechy, doomy, howls……and all used with equal strength.  Despite numerous positives about this album, I have a feeling the super long layoff may hurt this album big time. The tracks are great with a pretty decent diversity of heavy, fast and acoustic and a solid overall sound so hopefully old fans will rejoice at their return and a crop of new fans jump on board. Great album.