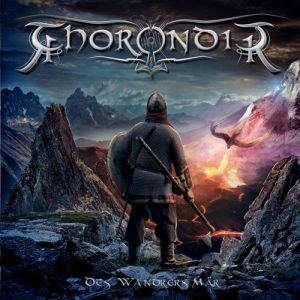 Our German friends of Thorondir took their sweet time to release their third full album. Eight years after Aus Jenen Tagen, soon Des Wandrers Mär will see the light. Two years ago at Dark Troll Thorondir for me was the positive surprise of the festival. And that’s saying something, since this festival has a good ear for hidden gems in the black and pagan music world. Interesting to determine whether the band is still gaining momentum.

Thorondir plays pagan metal. Meaning mostly fast paced music, harsh vocals, native language, lyric themes on old sagas or travels. The band ticks all these boxes. Not reinventing the scene, but performing it at a high level. The band has decided to make it a concept album. Meaning there is one lyrical theme throughout. Also meaning there is an intro, an outro, a little intermezzo in between and a lot of heavy songs telling the story. Not extremely original, yet rather convincing.

Thorondir is true to the pagan metal scene. And add a few specialities of their own. Most pagan metal bands wouldn’t use clean vocals. Thorondir does. Both single and sort of harmony clean singing are very well executed. Another USP is the fact that the band Is not ashamed of using keyboards to thicken the sound. That’s a plus in my book.

Within the confinements of pagan metal is ‘Thoron’. Starting very Ensiferum-y, yet finding its own tune. As all the other songs sung in their native language. Even the harsh vocals are on the border of being understandable. I prefer that to the grmblknhjpwllwwrh of most death metal bands. As the album goes on, it becomes clear that the band is into more than simply turning on the double bass and putting the pedal to the metal. A song like Das Totenheer von Barathir shows that these guys truly master their instruments. An acoustic gem, nice bass, nice guitar melodies. If any song is a decider between okay and good, this is it.

Almost at the end of the album ‘Berserkerwut’ takes the album another step up the ladder. Any of you guys into epicness, check out this song. Five minutes of pagan metal as the Norse wood gods meant it to be executed.

Without ‘Berserkenwut’ I would probably not have the album on repeat on my playlist. Now I do, which allows the album to grow on me. If you are into old school pagan metal and wishes it to stay around, Thorondir is one of the bands to keep an eye on.