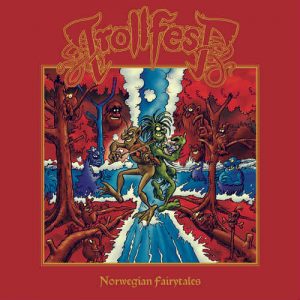 If it was a secret before, it certainly shouldn’t be now, TrollfesT deeply embodies my alter ego #trollpy. So of course, I leaped at the opportunity to review their latest homage onto our lot. Norwegian Fairytales is their (holy crap) eighth full length contribution, and there seems to be no end in sight, luckily for diehard fans like myself.
Hopefully, I am not the only one that believes these guys really delivered. With a hugely prominent social media presence, they had me baying for the release with a daily countdown, band members donning princess dresses on the gram. But that’s just the type of unusual band they are, super silly and outrageously fun. The album, however, clearly displays their creativity between the obnoxiousness and very well written, performed and produced metal that has a full sophisticated sound. This particular dichotomy is the main characteristic I dearly relate to. Now I’ve never been (bucket list item) but in live shows they set up with balloons, homecrafted dresses and I can only imagine what kind of other shenanigans. One can dream…
Some might argue that this album as a whole is less heavy and a bit slower than previous works. In my opinion, this certain type of restraint only demonstrates the maturity TrollfesT has acquired over the years. All previous albums projected a theme and this release is no different channeling the coldest, darkest time of the year in Norway, each track focusing on a separate myth or legend. Everything starts out precariously with what I can only discern as a waltzy 5/8s count and plenty of speed on Fjosnissen Fjaseri setting the mood for a massive album. Kjattaren mot Strommen is the likely album single and received one of my favorite TrollfesT videos yet with marvelous artwork by Jonas Darnell as usual, certainly worth a viewing. Keyboards are quite lovely and noticeable this album around and their beloved sound, filled with curious instruments and sounds like saxophone and WC flushes is ever present and complemented with the trademarked Trollsprak, or evil troll speak mixture of German and Norwegian. I am truly in awe of Trollmannen’s vocal abilities and previously unheard-of techniques. Honestly, when have you ever witnessed another vocalist do anything remotely resembling his antics in De tre Bukkene Berusa or Deildegasten? Like how???
It’s not all silliness and goof though, plenty serious and heavy themes are included, for instance with the emotional ballads Smafolkets Store Bragder and Nokken og Fossegrimen. TrollfesT is not one to invest time and effort into intricate solos and endless fingerpicking, instead the melodies and riffing are in focus, deeply enveloping us in the intended thematics. But a baby’s giggle, really??? The whole experience is wierdly uplifting. Most songs on this album are on the shorter side proving it doesn’t take 9 minutes to convey complete ideas and this makes them ever more approachable.
For most metal fans, they either love or hate TrollfesT but it isn’t just great folk-metal, it’s an astounding experience through an absurd and infectious persona, and personally I’m just delighted these guys continue to push out unique material.