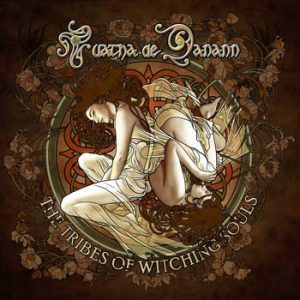 Brazilian Folk Metallers Tuatha De Danann have been working on a new EP since at least last year. Many readers may have already seen their lyric videos for “Your Wall Shall Fall”, and the eponymous “Tribe of Witching Souls”. Personally, I was eager to hear their latest effort to see whether the band would finally one-up the entire genre of Power Metal in terms of that almost drunken happiness latent in the music that everybody either seems to love or hate. Given the state of current events across the globe, I was admittedly expecting mostly social commentary on Tribe of Witching Souls, but I was pleasantly surprised to find another song about Boudicca and an acoustic version of one of their older songs on the album.
The title track, “Tribe of Witching Souls” is a very cheery and catchy song which essentially urges listeners to welcome a little magic into their lives. Within the intro there are a few nostalgic references to some of their past songwriting themes – a pleasant touch given how wistful the song already was. Here most of the leads are played on a banjo in lieu of the guitars, which unfortunately only seem to play the same two chords over and over again. As expected, the banjo gets the solo, although the flutes get their very own solo which is suitably celtic sounding.
Following the very cheerful opening, is “Turn”, a song that has a very similar atmosphere to “Abracadabra” from Tuatha De Danann’s second full-length album The Delirium Has Just Began. The lyrics once again have a somewhat political subtext and share the same hope for the future as the previous track. There are some fairly decent bagpipe segments and the guitars have a heavier and more prominent presence, making “Turn” feel more like a Metal song than a folk song.
Next, the lyrics take a break from social issues and touch upon the theme of Bouddica in “Warrior Queen”. The banjo drives most of the melody again with the guitars being mostly there to play a power chord every other drum beat. However, there is another heavier segment that invokes the urge to headbang even more than the previous track. “Warrior Queen” is followed by “Conjura”, which is, in essence, a by-the-numbers celtic folk song.
Next comes Martin Walkyier’s contribution. It honestly wouldn’t surprise me if Martin Walkyier (of Skyclad fame) actually composed the entirety of “Your Wall Shall Fall”. The song is very reminiscent of Skyclad’s music from Walkyier’s tenure, and the music sounds markably different from the other songs on the EP. From the transparently political lyrics to the more cynical and angry take on the idealism of the rest of the songs, “Your Wall Shall Fall” is essentially the heaviest and most aggressive song on this album (which isn’t saying much but it is comparable to Skyclad’s thrashier work).
The next song reverts to more folkish content with an acoustic version of the song “Outcry”, essentially a song about the evils of the Spanish empire’s colonialism. The closing track is “Tan Ping ra Tan”, a very florid folk tune that returns to the opening track’s theme of embracing the magic in the world. While it is quite a beautiful song, it lacks any real substance in terms of Metal, as the song is almost entirely composed of acoustic instruments and flutes.
Overall, Tribe of Witching Souls is a great album as long as one isn’t expecting a paragon of chugging brutality or anything especially heavy. The best song probably remains “Your Wall Shall Fall”, but that is primarily because I like angrier music and anything featuring Martin Walkyier. For a taste of what this album is like, the lyric videos mentioned early in this review are freely available on youtube.