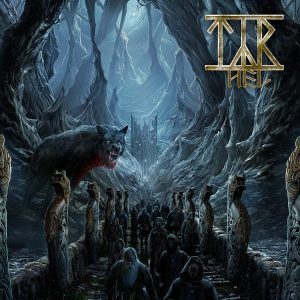 The time is close at hand for Faroese Folk Metallers Tyr to release their latest work entitled Hel. In the previous months, Tyr has released some of the usual precursory content to tease the album, including several of the songs for online streaming and a music video for “Sunset Shores”. While the band did issue a statement hinting that the album would be similar to past releases like Ragnarok, the album lyrically departs somewhat from Tyr’s usual viking themes. In fact, one could sum up the lyrics up fairly well by saying Hel is a cold, miserable place (and also of a very poetic persuasion).

For all intents and purposes, while the album might appear to be a return to the band’s roots and a different take on songwriting, neither of these impressions are completely accurate. Firstly, take the actual music. The fact that the style and sound is certainly very close to their earlier releases, especially Ragnarok, is true. There are melodic tendencies and a subtle rawness that will be familiar to anybody with significant exposure to the band’s back catalogue. However, for any apparent similarities, every song of this album is still vastly different from anything released previously in one key aspect. Many of the songs follow the same structure: virtuosic noodling on the guitar, several heavy drum beats, then then it goes about like a normal song until it ends with a guitar solo and a variation of the virtuosic intro. One might be thinking that such a predictable formula will run its course fairly quickly, however somehow, it doesn’t. The extent to which the vocals dominate the songs and with the different atmospheric or tonal variations between tracks the album does do well to keep everything feeling fresh and different. The vocals even cross over into growling territory (almost unheard of for Tyr), most noticeably on “Gates of Hell” and “Downhill Drunk”. Even the mandatory Faroese folk number is present, but it sounds like an elegy in comparison to the likes of “Turið Torkilsdóttir” or “Grindavísan”.

In all honesty, a more somber traditional song might also have been a refreshing change of pace were it not for the fact that all of the vocals include the same basic dreary lyrics usually involving some combination the words “cold”, “desolate”, “lonely” and “melancholy” somewhere in each song. The lyrics at first struck me as a complete departure from Tyr’s usual viking themed anthems but when I got to the track “Garmr” I realized that the departure was nothing more than thematic. Heri Joensen has previously said that the purpose of his songs “isn’t to give history lessons”, and truthfully, many of the songs on Hel are of the same allegorical nature as most of the band’s works, lacking only the viking metaphors. Whether the change in lyrical imagery is a natural progression for the band or not remains to be seen. Regardless of the wording of the songs, the vocal delivery itself and the presence of growling still makes the songs worthwhile.

All in all, Hel will be a crucial release for Tyr, regardless of how you look at it. There is a lot of innovation with just enough nostalgia thrown into the mix to keep things familiar. The most divisive part of the album will probably be the vocals. If you liked Tyr because of their viking symbolism, you might not like this album that much. Yet, if lyrics aren’t your main focus Hel should be a fairly interesting change. Only time will tell if Tyr’s latest album is a new direction or a scenic route.