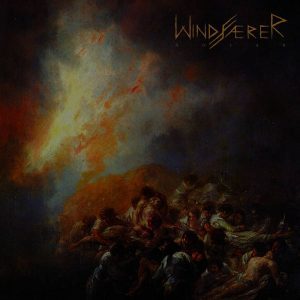 There are times when the “job” here at the site is incredibly easy, especially a reissue of an album I have heard plenty o’ times before. My friends in NJ’s Windfaerer have their killer release “Solar” being reissued this March via PRC and I would say this may be the fastest review I have ever typed up. Let’s go back to 2012 when I first heard this epic release which I would call an album but could also be an EP depending on your viewpoint. There are 7 tracks totaling about 35 minutes on the original release and was issued independently on main man Mike Gonçalves label Noir Perpetua. The reissue will feature one additional track with the current lineup…more on that shortly. I had to jump in the time machine and remember this was still when they were a 3 piece…..Mike handling all guitar, bass and vocal duties with maestro Ben Karas on violin and JP Andrade on drums. While the preceding release “Tribus” from 2010 introduced the sound, “Solar” cemented it and ushered in a new era in black folk metal. I can hear now in 2019 how they have expanded the sound now as a five piece with 2 classic albums since then with 2015’s “Tenebrosum” and a last year’s top 10 album for me with “Alma” plus a severely underrated split with Wolfcloak and Dumal from 2016. For fans of Saor who may not be too keen on the Celtic vibe and maybe want something a little less ethereal, head right for Windfaerer. The tracks here are overall simpler in terms of arrangements but no less brutal and all consuming and again, this was 3 guys doing this stuff. So, let us say you have this already and think to yourself “why would I get this?”….well the CD features new improved artwork (probably not reason enough) and a bonus track and I believe the first song I have heard them cover….the classic Emperor track “Night Of the Graveless Souls”. I almost had an aneurism as I really didn’t look that closely at the track list and this one closed out the release….to which I then hit repeat on the bonus track 5 times. That is how you do a cover…..true to the original, equally heavy with their spin on it. Sonically the release has a veiled overall sound but is still has discernibility in terms of riffage and vocals. While maybe not as musically complete and mature as their newer albums if you really start nitpicking, “Solar” is still epic 7 years on and shows why these guys are the real deal…..wow, I just typed this thing in like 15 minutes, a new record for me….. Great release.