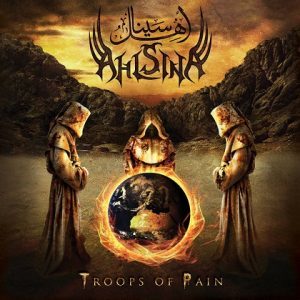 When there is a description of an act being “international”, I am almost immediately skeptical of what the end product will be. Acts like Folkearth, for example, have a number of players from across the earth but to me, never really gel as a band. When I saw Ahl Sina described as international, I was hesitant at first at what to expect. Formed in 2009 in Egypt, Ahl Sina has had a long journey getting to this point which is their first full length in “Troops Of Pain”. Released independently, the album features 9 tracks at over 65 minutes. I still don’t think the middle eastern style has been explored enough in folk metal, so it is nice to hear another act give it a go. Flute and violin would be the main folk instruments here to give you that sense of being in the middle of the desert and they work rather well here. An obvious comparison to Orphaned Land is where you should start with a little Amorphis (yes, they definitely have a style based in the middle east somewhere) mixed with some power metal of no specific variety and I think you get a pretty idea of their overall sound. Vocalist Moustafa Troll is the man behind the formation of the act so his vocals figure prominently in the direction of the music. He employs a number of styles and I think the tracks are either are made or broken by his choices which are somewhat inconsistent. Case in point, in opening track the 10+ minute “The Gift” he employs 3 different techniques….clean, semi-screechy and death/black metal of which I really only find the latter being successful. I wish he had stuck with this style the whole album as it is way more powerful and fits….maybe it was overthought the use of the various vocal types? I would probably say there is way more spoken word parts here than are needed but not really a big deal. Track length is over 8 minutes and shorter tracks I feel would have been a better choice and made for easier decisions in the vocal department. Musically the whole album is solid and way above par and shows more cohesion than most international acts…..lots of mood created with mid paced, tasteful riffs mostly driven by the folk instrumentation. I would say this may be slightly more progressive than I am giving it credit for, but it is not too much so. The sound quality is also very inviting and hits all of the marks for me……discernibility, natural, heavy….a great sounding album. This album has been with us for a while here at the site and my feeling is that no one reviewed it after hearing Moustafa’s vocals on the first track, punching out on it. My score is definitely based on the average of the music and overall sound (9.5) to the vocals (5.5) which is a different take for me, but I think may give you some perspective on how good this could have been with a more defined vocal direction. If you can separate out some of the vocal ideas out from the music, you will find a really decent debut album and one worth giving a shot.