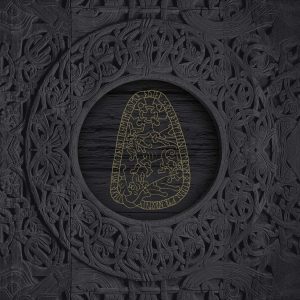 If your mind hasn’t already been blown by what Arstidir Lifsins has put forth up to this point, then prepare yourselves for annihilation…in a good way. Formed in 2008, Arstidir Lifsins (“The Seasons Of Life”) is semi-international in origin (Germany/Iceland) and up to this point have not put out one disappointing release. Two of their more recent releases have been in my best of the year lists and this new release I’m sure will be as well. “Saga á tveim tungum I: Vápn ok viðr” (let’s go with “History of two languages I: A weapon and wood”…..thanks Google translate) is their 4th full length for their label Van Records. Set to be unleashed on April 26th, “Saga….”has 9 tracks totaling a shocking almost 70 minutes of music. There is no simple way of describing their sound but it is definitely black metal based but I suppose could be interpreted as Viking metal given the subject material of the lyrics. A comparison to Wardruna could be a good place to start if just concentrating on some of the vocal aspects but when mixed with the music and tempos, the comparison definitely changes. Maybe some Skalmold with classic Satyricon or Arckanum works for me with the biggest differentiating factor being track length and overall brutality. While I typically think of Arstidir Lifsins issuing 10+ minutes tracks lengths (there are 3 on here), more of the tracks are less than 9 with most being in the 3-5-minute range which make them much easier to consume. That I feel is the biggest difference on here is somewhat more accessible a listening experience….don’t get me wrong, this is still heavier than most albums out there but the shorter track lengths are not as overwhelming as the longer ones. Still using lyrics in old Icelandic, “Saga á tveim tungum I: Vápn ok viðr” is a concept album but it may not be obvious given the language used. The vocals are always the most noticeable part with black metal style for primaries with a very hypnotizing choral/chant for backings and accents. However I think the riffing and tempos are equally as important and make a bigger impact this time around…..completely relentless. I’m sure most of you are thinking this sounds pretty epic and it is….and there is a 2nd part of this being released later this year so strap yourselves down to something. The overall sound is bleak and devastating……an impenetrable black wall of fury with no escape. Like past releases, “Saga á tveim tungum I: Vápn ok viðr” is on some level, difficult and hard to grasp at times to get through but once you are in the right mindset, it proves to be worth the perseverance. Another amazing album from Arstidir Lifsins.